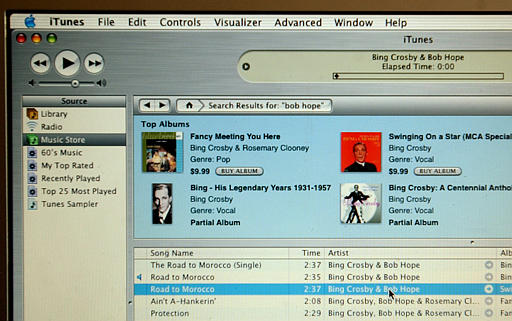 (CelebrityAccess News Service) – The music industry's internet strategy is turning the corner, with new legal online music sites spreading fast and the campaign against illegal music file-swapping making a clear impact across the world. These are key conclusions of the IFPI Online Music Report 2004. The Online Music Report is the recording industry's first comprehensive global progress report on the growth of legitimate online music business.

The report shows legal online music taking off internationally in 2004, following on the success of services such as Apple iTunes, Napster and Rhapsody in the USA. Announcements of services outside the USA are expected by those players in the first half of 2004. In Europe, some half a million people are already signed up to more than 30 different legal sites. This figure is expected to rise sharply in 2004 as record companies continue license their catalogue for legitimate distribution online.

Consumers can now get music online via a range of payment methods, including paid-for downloads and subscription, from online sites such as MSN Music Club, Virgin Downloads, Tiscali Music Club, HMV Digital Downloads, Fnac, TDC musik, Karstadt and MTV. Demand for these services, powered by the pan-European distributor OD2, rose sharply in 2003.

In addition several independent services are planned, such as Germany's cross-industry business-to-business platform Phonoline, which will launch in early 2004 with 250,000 tracks available.

New figures also show that the industry's campaigns against illegal file-swapping have sharply raised public awareness both in the US and in Europe. In a new IFPI-commissioned survey of consumers in four major European markets – Denmark, France, Germany and UK – more than two thirds of respondents are aware that distributing music online without permission is illegal.

These very high levels of awareness are put down to the massive escalation of the industry's internet anti-piracy efforts in 2003. The campaign has included lawsuits against hundreds of large-scale internet users; the despatch of millions of 'instant messages' emailed to file-swappers' computers; mass information campaigns in colleges and universities in over 20 countries; and the launch of the international educational website www.pro-music.org.

The anti-piracy campaign also appears to have dented internet piracy levels worldwide. After doubling to one billion files between 2002 and the start of 2003, the number of files illegally on the internet at any one time has fallen over the last nine months by 20% to 800 million in January 2004.

Jay Berman, IFPI Chairman and CEO, said: "For everyone working to create a successful legitimate online music business, this report reflects a new sense of optimism and evidence of real change. We believe the music industry's internet strategy is now turning the corner, and that in 2004 there will be, for the first time, a substantial migration of consumers from unauthorised free services to the legitimate alternatives that our industry is providing internationally."

Key findings of the Online Music Report are:

* A critical mass of legitimate online services is taking hold in Europe, but consumer awareness of them is very low. The number of tracks available rose from 220,000 to 300,000 (up more than 30%) in the last three months of 2003 – but only one in four consumers surveyed are aware they can get music legally online.


* The industry's internet anti-piracy campaign is working: most people across Europe know that nearly all file-swapping is illegal. An average of 66% of people across the four countries know that file-swapping without permission of the copyright holder is illegal, and an average of 54% of consumers surveyed support legal action being taken against infringers. At the same time the number of illegal music files on the internet fell from one billion files to 800 million between April 2003 and January 2004.

* Internet piracy remains a huge problem internationally, despite the apparent impact of litigation in the US and education efforts worldwide. While the overall fall in the number of files on peer-to-peer services is driven by a sharp reduction in files on the best-known FastTrack network (which hosts the KaZaa service), there has been an increase in the number of files on other peer-to-peer networks. –Bob Grossweiner and Jane Cohen