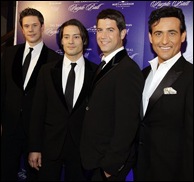 LOS ANGELES, CA (CelebrityAccess MediaWire) — Since coming together in 2004, four of the greatest voices in the
world, David Miller, Carlos Marín, Urs Buhler & Sébastien Izambard have spearheaded an entire musical
genre by bringing the sound of opera to the world of popular music. With over 22 million albums sold to
date, Il Divo continue to confirm performances around the world as part of their massive touring plans for
2009 in support of their fifth album The Promise which is approaching Platinum status in the U.S.

The 2009 tour, ‘An Evening with Il Divo,’ kicks off February 21st in Manchester and will perform in 31
European cities before heading to North America and will cross six continents before closing the year in
Australia, Japan and South East Asia.

The new show will be staged and choreographed by William Baker (Kylie, Jamiroquai) on a state of the art
set, with a tour wardrobe designed by Giorgio Armani, featuring outfits from Giorgio Armani, Emporio
Armani and Armani Collezioni collections.
The show will feature repertoire from their five albums and several new songs, with Il Divo onstage the
entire evening. They will perform for approximately 90 minutes with a 20 minute intermission integrated into
the set (there will be no support).

The Il Divo world tour is produced by Live Nation Global Touring and by arrangement with Octagon Music
and Syco Music.