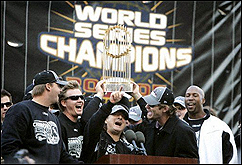 A host of changes to the Illinois scalping law, including the legalization of secondary ticket market, are intended to thwart fraudulent selling by creating a larger pool of ticket resellers. It is hoped that the plan will even be successful in bringing down the often astronomical prices for scalped tickets.

According to a report by the Wall Street Journal, ticket prices on the secondary market dwarfed those found on Ticketmaster, the White Sox’s official vendor, mainly due to limited supply. While the top price for a Ticketmaster ticket to the first game of the 2005 World Series in Chicago was less than $200, a ticket had already been sold for $7,500 through online reseller StubHub Inc.

The legal changes follow a trend by state legislatures to catch up with illegal resellers by joining them instead of fighting them. This summer, New York raised the percentage limit on how much resellers can mark up tickets for venues of more than 6,000 people to 45%. Resellers are currently lobbying to change existing laws in Massachusetts and Florida as well.

The new laws could mean that prices for resold tickets for other events such as concerts and theater performances could fall too as a greater number of sellers post tickets online. They also mean stiffer competition for ticket brokers, the definition of whom varies by state, but who often distinguish themselves from scalpers by being licensed by their state or by joining an association such as the National Association of Ticket Brokers in Washington, D.C.

The liberalization of resale laws may have also opened the floodgates for fraud among scalpers. Many resellers have been diligent about reminding consumers of ways to avoid being duped. Standard warnings include never to pay cash for a ticket and to always check the location of the tickets against the map of the stadium to ensure that your seat exists.

“If it seems to good to be true, it probably is,” Gary Adler, general counsel of the National Association of Ticket Brokers in Washington, told the WSJ. –by CelebrityAccess Staff Writers