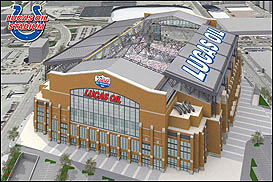 INDIANAPOLIS, Ind. (CelebrityAccess MediaWire) — A dozen major players, including AEG Live, SMG and Global Spectrm have responded to Indianapolis' call for bids as they consider the shifting management of major venues around the city to private management in an effort to save money.

Among the venues to be included in the deal would be Lucas Oil Stadium, the Indiana Convention Center and the Conseco Fieldhouse. They are currently managed for the city by the Capital Improvement Board but the board has struggled to overcome a projected $47 million deficit for 2010, the Indianapolis Business Journal reported.

SMG, which manages over 200 venues in the U.S., including 5 NFL stadiums has submitted an independent bid to operate the venues, but some of their rivals, AEG and Global Spectrum have teamed up with Pacers Sports & Entertainment and the Indianapolis Convention & Visitors Association to submit a partnership proposal.

“We are prepared to offer our full corporate concentration and resources to this project, and we look forward to the opportunity to work with you on this exciting civic project,” Pacers Sports and Entertainment President Jim Morris and ICVA CEO Don Welsh wrote in a statement accompanying their bid.

For now, the CIB has referred the proposals to The Office of Enterprise Development who will spend the Spring reviewing the matter and soliciting business bids for the general stadium and convention center manager’s job, the IBJ said. – CelebrityAccess Staff Writers