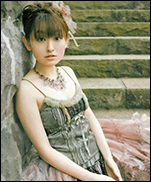 TOKYO, Japan (CelebrityAccess) — Yukari Tamura, a Japanese pop singer and voice actress, known for her high voice and affinity for Lolita fashion, has canceled live performances as well as her radio shows and announced changes to the ownership of her fan club.

In a post on her official website, a rep for Yukari wrote that the Tamura Yukari 2016 Fuyu Live Kaisai" concert has been canceled, citing 'various circumstances' making the event impossible to stage. As well, Yukari's two radio programs — Tamura Yukari no Itazura Kuro Usagi (Tamara Yakuri Mishcevious Black Rabbit) and Kissa Kuro Usagi Himitsu Kobeya (Black Rabbit's Secret Small Tea Room) — have both been brought to an end, with the last broadcasts taking place on March 26 and 25th respectively.

Yukari's website is slated to undergo maintenance on March 21st, with no announced date for relaunch and her staff's Twitter account is being shuttered on March 20th.

Also announced was a change of ownership for Yukari's "Mellow Pretty" fan club, but did not provide information about the new ownership.

While the reason for all of these changes, or Yukari's future plans was not revealed, she had previously hinted that 2015 might be "the beginning of the end" and a "slow countdown."

Yukari has provided voice talent for numerous anime characters, and released 35 singles and 12 albums over the course of her career.

Her management company did not respond to a request for comment. – Staff Writers