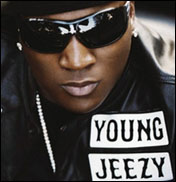 MOUNTAIN VIEW (CelebrityAccess) — Rapper Jeezy and promoter Live Nation are facing a lawsuit alleging wrongful death in connection with a fatal shooting at a 2014 concert at Shoreline Amphitheatre.

According to the San Jose Mercury News, the lawsuit alleges that Jeezy, otherwise known as Jay Wayne Jenkins, killed Bay Area concert promoter Eric Johnson Jr., in a dispute over a show at a San Jose nightclub following the concert.

Live Nation was included in the suit after they allegedly failed to provide adequate security that might have prevented the shooting.

Media reports about the 2014 incident state that as headliner Wiz Khalifa's set was concluding, a confrontation backstage between Johnson and Jenkins’ entourage broke out. The suit alleges that a “black man approached Mr. Johnson’s car and shot several rounds into the front driver side door and window.”

Weapons were later discovered on Jeezy's tour bus and members of his entourage were arrested for unlawful possession of firearms, but no one was charged in the shooting, the Mercury News reported.

Lawyers for Jeezy and Live Nation did not respond to a request from the Mercury News for comment. – Staff Writers