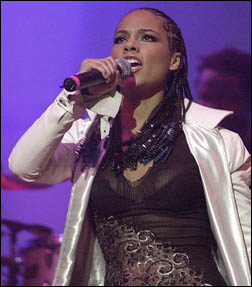 Michael Jackson, the subject of a behind-the-scenes tussle between music's two biggest awards shows, accepted an Artist of the Century award. He didn't perform, though.

"Everybody stand up," he said.

Keys, whose debut disc "Songs in A Minor" was one of last year's top sellers, was named favorite new pop artist and favorite new soul artists She had been nominated for five awards, more than anyone else.

"This has been a fantastic year," said Keys, whose soulful hit, "Fallin'," dominated the airwaves over the summer.

The awards are a popularity contest based on music sales. India.Arie, who received seven Grammy nominations last week, was shut out of the AMAs.

'N Sync's Justin Timberlake noted some audience grumbling when the quintet won favorite pop group over U2 and the Dave Matthews Band.

Luther Vandross was named favorite soul artist for the sixth time. "I never went away," he said, "but I'm glad to be back."

Recognizing the sales punch of inspirational music, the AMAs started a category to honor it. The initial award went to Yolanda Adams, who raised the roof by singing "Open Up My Heart."

This year's ceremony had a racy tone: it featured Dick Clark wearing a dress, a bleeped expletive by host Sean "P. Diddy" Combs and a lewd reference by Janet Jackson to Lenny Kravitz's anatomy.

Most of the night's attention was focused on someone who isn't even among the nominees.

Jackson's scheduled appearance prompted AMA producer Clark to sue the man in charge of the Grammys for $10 million in December.

Clark alleged that C. Michael Greene, president of the Recording Academy, had threatened to deny Jackson an opportunity to perform at next month's Grammys if Jackson showed up at the American Music Awards. Clark claimed Greene has used such tactics for years to siphon talent from the AMA show, which always airs before the February Grammy telecast. Greene has denied the charges.

While Jackson accepted his award on ABC, he was shown performing "You Rock My World" on CBS, which was rerunning the Jackson concert special it first aired in November.

Country singer Garth Brooks, who won an Award of Merit, said backstage that artists should be free of worrying about such industry politics.

"I say, back off, you're nothing without the artists," Brooks said.

Publicity over the legal battle may help boost the awards show, which has suffered declining ratings in recent years.