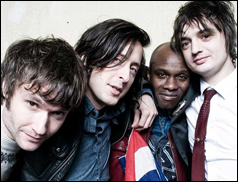 LONDON (VIP-NEWS) — Following rumors of a £500 million Oasis reunion, the U.K. `s other golden gods, the Libertines, are reportedly being paid 1 million pounds to perform together at London`s Hyde Park on July 5th for the first time since their 2010 appearance at Reading and Leeds, according to the Guardian.

Pete Doherty, who will split the earnings with co-frontman Carl Barât, said, "It`s completely in the spirit of the band to play Hyde Park for the money! It`s filthy!" Though it was rumored the band received 1.5 million pounds for their festival gig four years ago, Doherty says he and Barât actually came away with a relatively paltry sum.

"Last time was supposed to be £240,000 each after tax for me and Carl," Doherty clarifies. "But by the time they paid for all the buses and shit there was just a tax bill. This time I think we`re getting half a million each, me and Biggles."

Despite the fair split, Biggles and Bilo seem to have conflicting reasons for getting back together: while the former denies they get back together for the money ("It`s quite nice to get paid once in a while . . . [but] that isn`t our priority in bringing back the Libertines. [It`s] about bringing together the past and the future for the audience and all those people who the Libertines mean something to"), his partner says the band even signed to Rough Trade "purely for the money."


"It`s a fucking horrorshow," says Doherty, who adds that new material is a possibility. "It just happens to be amazing rock`n`roll music." Amen!