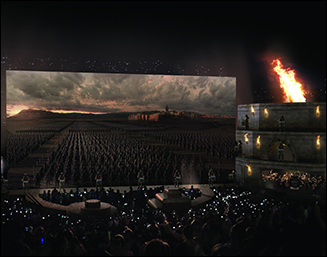 LOS ANGELES (CelebrityAccess) — Game Of Thrones fans will have something to tide them over until the 7th season of the popular HBO program begins as Live Nation is launching a new, Game of Thrones-themed tour.

Live Nation says that the official Game Of Thrones Live Concert Experience will provide an 'immersive music and visual experience that will bring the Seven Kingdoms to life on a scale never seen before’.

Game of Thrones composer Ramin Djawadi and a full orchestra will be featured in the tour, which kicks off at the Sprint Center in Kansas City on February 15th, 2017. The tour will hit 28 cities in the US and includes shows in major markets like New York City, Los Angeles, Montreal and Houston.

As well, the tour will use innovative music tour production and video technology that will recreate the various realms potrayed in the HBO program, using both footage from the show and new imagery created exclusively for the tour.

"For seven years, Ramin has been blowing our mind with his music's force, subtlety, and endless inventiveness," said Game of Thrones® creators/executive producers David Benioff and D.B. Weiss. "The GoT Concert Experience will be unique in the history of concert tours, an eye-popping, ear-splitting, phantasmagoric blend of the show's visuals and Ramin's powerful compositions. We are more excited for it than anyone." – Staff Writers