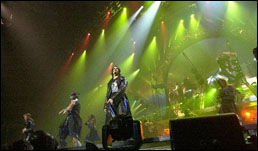 In search of new managers, the Backstreet Boys have decided on the powerhouse punch of Irving Azoff and Howard Kaufman to take over the management of their career. The group recently split from The Firm.

Carlson most recently was at Deluxe Entertainment where his clients included I-5, Eric Gales, Michael De Lorenzo, and Keaton Simons. Before that Carlson was with Fitzgerald/Hartley (Toto), where he worked producers Elliot Scheiner and Patrick Leonard, as well as country artist Jim Lauderdale.