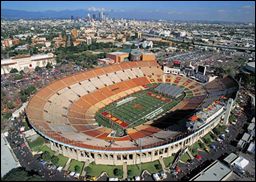 The stature of the Coliseum has officials hoping to secure a deal with at least $6 million to $8 million a year for the naming rights, the Wall Street Journal reported. In its past the stadium has played host to two NFL football teams; the Raiders and the Rams, baseball's Dodgers, the college football team USC Trojan and two different Olympic games – one in 1932 and in 1984.

It is somewhat unusual for the naming rights for such a well-known and popular stadium to be publicly auctioned, however with California voters being unwilling to invest public money in sports complex upgrades, commission leaders have turned to a naming rights auction to secure funding.

"We needed a bigger boost," Pat Lynch, the stadium's general manager told the WSJ. "When the naming-rights deal comes, we'll have the money we need." – CelebrityAccess Staff Writers