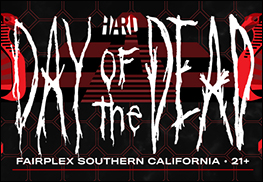 LOS ANGELES (CelebrityAccess) — Nearly 500 people were arrested at a pair of electronic music festivals held in southern California over the weekend.

According to the Los Angeles Times, police arrested 148 people on Saturday, the first day of the Halloween-themed HARD Day of the Dead festival at the Pomona Fairplex, with an additional 162 people arrested on Sunday. Charges ranged from public intoxication, possession of illegal drugs or being under the influence of a controlled substance to carrying false identification, police said in a statement.

The festival, produced by Live Nation's EDM subsidiary Hard Events, featured a lineup that included Skrillex, Deadmau5 and Hot Chip. Live Nation told the L.A. Times that attendance for the first day of the event was about 20,000. Attendance figures for Sunday were not disclosed, but Live Nation said they anticipated the crowd wouldn't exceed 20,000.

On the same weekend in San Bernardino, police arrested approximately 180 people at Psycho Circus, a two-day festival staged at the National Orange Show Events Center, the Times reported. There were no major incidents at the festival and most of the charges stemmed from illegal drug possession, trespassing or public intoxication, the Times said.

San Bernardino police Lt. Richard Lawhead told the L.A. Times that the festival, produced by the Live Nation-affiliated Insomniac Events, drew about 42,000 attendees on Friday and an additional 46,000 on Saturday.

“For the most part, all of the patrons were very, very cooperative, nice, respectful,” Lawhead said. – Staff Writers