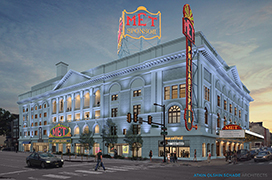 PHILADELPHIA (CelebrityAccess) — Developer Eric Blumenfeld’s planned redevelopment of Philadelphia’s Metropolitan Opera House, will move forward this week after closing on a $56 million financing package from both public and private lenders.

According to the Philadelphia Inquirer, the package included financing from Philadelphia Industrial Development Corp. (PIDC), Fulton Bank, New Jersey-based lender Billy Procida, and New Orleans-based Enhanced Capital and will be used to complete construction on the historic opera house.

Blumenfeld told the newspaper that the project is already 30% complete, with the interior demolition already concluded.

The opera house was originally opened in 1908 by impresario Oscar Hammerstein and was purchased in 1954 by the televangelist Rev. Thea Jones for his ministry, but by the late 1980s, declining membership and an aging physical plant saw the property deteriorate until it was condemned by the city as unsafe.

In 1996, the property was purchased by Reverend Mark Hatcher for his Holy Ghost Headquarters Revival Center and over the next decade, the church spent more than $6 million stabilizing the property.

In October 2012, Holy Ghost Headquarters Church partnered with Blumenfeld to redevelop the opera house, with Blumenfeld eventually purchasing the property for the princely sum of $1. Renovation work began in 2013 but was soon halted due to a lack of permits.

In February 2015, the church sued Blumenfeld over project, claiming that Blumenfeld had misled them about his finances and the condition the construction work had left the church in, but last year, the two parties announced that they had reached a joint agreement, with Live Nation signing on to operate a concert venue in the building following a planned $45 million rehab of the property.

The re-opening date for the concert hall is now set for December 2018.

“The Met in Philadelphia is still a new thing for most people,” Geoff Gordon, Philadelphia regional president for Live Nation, said in a statement to the Inquirer. “I think a lot of people have a misconception when they hear ‘The Met’ — that it’s in New York — well, Philly has one, too, and ours has been a part of the Philadelphia culture for many years.”

“The reincarnated Metropolitan Opera House is about to become one of the great venues in the world,” Gordon added.