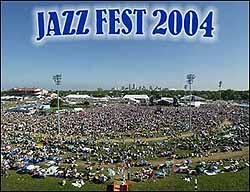 (CelebrityAccess News Service) —
In celebration of the 10th anniversary of South Africa’s democracy, the 2004 New Orleans Jazz & Heritage Festival will showcase that country’s culture throughout next year’s event, April 23 – May 2. About 100 South African musicians and artisans are expected to participate, making it America’s most extensive tribute to the first decade of the new South Africa.

“The South African government has identified this as one of the major events to mark ten years of democracy,” said Thandiwe January-McClean, deputy-director general, Department of Arts and Culture, Republic of South Africa. “Through the Embassy in Washington, DC, the government saw the potential in the partnership of South Africa and the New Orleans Jazz &Heritage Festival and involved itself in negotiations culminating in the agreement being announced today. In South Africa’s view, the anniversary of ten years of democracy offers an opportunity not only for celebration but also for a renewal of the commitment to address the many remaining challenges. This is more easily done in partnership with friends of South Africa in the U.S. and the world.”

Africa has appointed esp AFRIKA to act for the department in respect to this event.

Quint Davis, producer/director of Jazz Fest, said the Festival’s Heritage Fair at the Fair Grounds Race Course will feature a large pavilion-style tent with a South African marketplace and a stage for acoustic performances. The Congo Square Stage, always dedicated to presenting African and African-influenced artists, will be the site for many performances by South African musicians, who will complement the stage’s usual offerings of reggae, salsa, rhythm &blues, hip-hop and more.

Warren McDaniels, president of the Board of Directors of the New Orleans Jazz &Heritage Foundation, Inc., said, “This project has been several years in the making and a great deal of work by many, including members of the Foundation’s Cultural Exchange Committee, has paid off. We’re looking forward to adding South Africa to the distinguished list of countries featured at the Festival over the years.”

The Embassy of South Africa in Washington, D.C. was essential to facilitating the two-year development of the South African celebration at Jazz Fest. Davis and McDaniels credited the efforts of Damon J. Batiste and the New Orleans South Africa Connection (NOSACONN), a locally based cultural exchange organization, with playing a crucial role in bringing Jazz Fest and South African government agencies and corporations together to make the celebration possible.

South African Airlines has agreed to be a major sponsor of the cultural exchange, providing transportation for all South African participants to America. South Africa’s Department of Arts and Culture will make important contributions to help underwrite the costs of the initiative.

Since 1996, Jazz Fest has presented cultural celebrations of Haiti, Mali, Panama, Brazil, and Martinique, as well as other special tributes such as FrancoFête (the tricentennial of Louisiana), Louis Armstrong’s centennial, a showcase of Native American culture, and the bicentennial of the Louisiana Purchase. –Jane Cohen and Bob Grossweiner