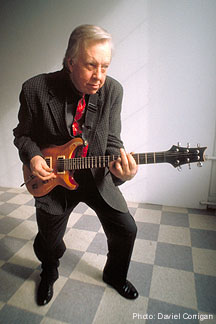 MINNEAPOLIS (AP) — Dave "Snaker" Ray, an influential figure of the folk-blues scene of the 1960s who won quiet renown for his virtuoso guitar work, has died at 59.

Ray, who was diagnosed with lung cancer in May, died at home Thursday, said his longtime band partner, "Spider" John Koerner.

The two, plus harmonica player Tony "Little Sun" Glover, formed the acoustic trio Koerner, Ray & Glover in 1962 and the next year released the landmark "Blues, Rags and Hollers" album.

Recording several albums and performing at folk festivals around the country, the trio never achieved more than cult status. But they influenced such legends as the Beatles, Bob Dylan, the Rolling Stones, Bonnie Raitt and Beck.

The parted ways in the late 1960s but periodically reunited over the years and also recorded individual albums.

"It's amazing how much these guys accomplished with so little," Rolling Stone senior editor David Fricke said. "The whole indie-rock business owes them a long debt of gratitude."

Beck, who had Ray and Glover open for him in the Twin Cities, said of the trio: "They seemed to be one of the only people from that folk-revival period who would just completely play their music with abandon. They were just so raucous."

As young Bobby Zimmerman, Dylan had listened to records at Ray's house and traveled in the same circles. "Every time they play, the lights shine," wrote Dylan when they three released their "One Foot in the Groove" album in 1996. In recent years some of their earlier works, including "Blues, Rags and Hollers," have been reissued on CD.

In the '40s, Brooks was known as the "Queen of the Boogie" and later as a torch singer with such hits as "That's My Desire," "Trust In Me," "Don't Take Your Love
From Me" and "Dream."

She made memorable appearances in the films "The Bad and the Beautiful" and "In a Lonely Place" and had her own Los Angeles television show in the '50s.

After retiring in 1971, Brooks returned to music in the early '90s, recording for Virgin's Pointblank imprint. In 1993, the Smithsonian-based Rhythm and Blues Foundation presented her with its Pioneer Award.

Mal Waldron, whose childhood dreams of becoming a great pianist took him through the golden age of jazz alongside such legends as Billie Holiday, Charles Mingus and John Coltrane, has died, his manager said Tuesday. He was 77.

Waldron enjoyed his heyday during the 1950s and early '60s, working first in New York before moving to Germany. He gained popularity as a performer throughout Europe and in Japan.

He had lived in Belgium for a decade before his death Monday, said his manager Rob Leurentop. Waldron died of complications caused by cancer, he said.

He played his last concert in Lille, France, only two weeks ago. His last recording, released in October, was called "One more Time."

Waldron was easily recognizable in his later years for his mop of white hair and elegant posture. He became Billie Holiday's last accompanist in the 1950s, and played alongside her until she died in 1959. He also played in the bands of jazz greats Mingus and Coltrane.

His most famous ballad, "Soul Eyes," was originally written for Coltrane. It became a jazz classic, covered by musicians including Stan Getz and Anthony Braxton.

Waldron was born in New York City in 1925 and began studying piano when he was 8 years old. His focus quickly turned from classical music to modern jazz. He cited Coleman Hawkins' 1939 recording of "Body and Soul" as his seminal musical experience.

He studied music theory and composition at Queens College, and variations on music patterns became his trademark.

Funeral arrangements were not announced.

Arledge died Thursday afternoon at Memorial Sloan-Kettering Cancer Center, said Jeffrey Schneider, an ABC News spokesman. No cause of death was immediately given.

Although he retired in 1998, Arledge's far-reaching influence can still be seen on TV all the time: when a slow-motion replay is shown at a sporting event, when Peter Jennings reads the news or when a sportscaster criticizes a player.

He was single-handedly credited with bringing modern production techniques to sports coverage, then building ABC News into a power during the 1980s. For a decade, he was president of the sports and news divisions at ABC.

The 36-time Emmy winner was cited as one of the 100 most important Americans of the 20th century by Life magazine in 1990.