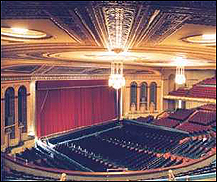 DETROIT (CelebrityAccess MediaWire) — Olympia Entertainment has announced that they are parting ways with the Masonic Center, citing challenging economic conditions

The Ilitch-owned entertainment company announced in a statement that they had decided several months ago not to renew their two-year contract to operate the venue.

As the largest building of its kind in the world, the Masonic Temple boasts over 1000 rooms, including two complete auditoriums: the 4,300-seat Masonic Temple Theatre and the 1,600-seat Scottish Rite Theatre, along with a third theater that can be used for stage rehearsals.

Over the years, the main stage has hosted performances ranging from Judy Garland to The Rolling Stones to Al Green, to the Metropolitan Opera and Disney's The Lion King. From opera to hip hop, the Masonic Temple has served as a prime venue for many of the world's hottest entertainers, however there are currently no shows on the books. According to the Free Press, there were just a smattering of major events at the Temple since 2009, including a performance by George Benson and "Jesus Christ Superstar."

Olympia came aboard at the Masonic Center after striking a deal with the Nederlander Organization, who had operated the building on behalf of the Masonic Temple Association for several decades, to share costs of the building's operation and upkeep. When Nederlander pulled out in 2008, Olympia took over operations at the venue.

"During management of the venue, Olympia invested millions of dollars in the operations of the facility, including paying off and restructuring debt on behalf of the Masonic Temple Association," the company told the Detroit Free Press "Olympia also worked diligently to book and promote entertainment acts and private events at the venue. We stepped into a very difficult situation and did our best, but unfortunately the business climate did not support continuation of the agreement."

As of yet, a new management company for the facility has not been announced. – CelebrityAccess Staff Writers