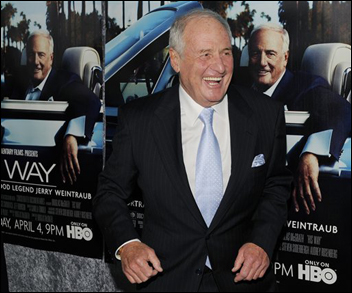 It was a namedropper's paradise.


That's what George or Barbara Bush said at the end of the movie, I can't
remember which, I'm gonna have to see it again!


You see Jerry arranged this affair for the President…


And I had no idea last night's affair would be such a Hollywood clusterfuck.
Really. I went as myself, jeans and a fleece, but Tinseltown royalty came
dressed to the nines and there was a red carpet and…


Jerry certainly knows how to throw a party.


Matt Damon. Bruce Willis. Andy Garcia. Mariel Hemingway. I could name
movie stars all night long, but who impressed me most?


There was one point when we were walking to the afterparty and Larry was
right in front of us and he did that spin, you know, that long-legged Gumby
move, where he rotates on his axis and smiles…


You see Larry David is three-dimensional, unlike the movie stars, who are
barely more than cardboard cut-outs in the director's vision. Larry David
is a rock star. You remember rock stars, right? People who may not have
been beautiful that you adored, because they did it their way, they created
it all from deep down inside?


Jerry Weintraub dealt with many a rock star. And when Elvis appears in this
movie your heart buzzes in a way no actor can ever make it jump. And I'm
not an Elvis fan. But one could see the power, the intensity, the sheer
explosion of life in this footage. What did Eddie Rosenblatt tell me after
Andy Rooney ignominiously trashed Kurt Cobain? "Movies are larger than
life, rock music, when done right, is life itself."


And isn't it interesting that Irving Azoff leads off the interviews. I ran
into him in the bathroom. It was that kind of night. We talked about the
Sammy Hagar book.


Now even though we saw this film at Paramount, on the big screen, it's gonna
play on your flat screen at home, on HBO, and you should watch it, because
the footage from the old days will blow your mind.


Not only Vegas and Howard Cosell, but Jerry's family, in color movies! My
father had an 8mm camera in the fifties, I have no idea where those films
lie. But I do have the slides, I made sure my mother didn't throw those
out, even though she planned to!


Because if you want to be in business, if you want to get rich, you've got
to work, you've got to find your own way. By shoveling snow, by delivering
groceries, by concocting vacation packages, including clothes!, for military
men returning from the Aleutian Islands.


They don't teach you this in school.


Which is probably why Irving Azoff dropped out of college. Hell, he was
representing the entire air staff of WLS when he was still wet behind the
ears!


You triumphed on your wits.


And those winning in the world today are doing the same thing. Steve Jobs?
He dropped out of Reed and he's one of the greatest salesmen of all time.
He specializes in making you buy what you don't even know you want.


And Jerry calls Colonel Parker every day for a year to try and buy an Elvis
tour. There's footage of the Colonel here. Amazing, with the legend so
big, he looks so normal, so average.


But it's what inside the mind that counts. The accoutrements are just toys.
A fancy car will make heads turn, a surgically-enhanced body too, but
neither is a match for the sheer creativity emanating from the cerebrum,
which Jerry specializes in.


And then there's the combination of honesty and drive. Jerry doesn't lie to
Lew Wasserman, yes, he was using the WATS line, and Lew doesn't fire him for
it, but promotes him! Who else has got the balls to own up to messing with
the boss's business?


Even better, Jerry confronts Frank Sinatra about his inability to show up
for every gig. If you want to play with the big boys, you don't look up to
them, you've got to play as an equal, or you're toast, they'll run right
over you.


But my favorite moment in the movie was when Jerry was swimming in his pool
and Matt Damon was doing the voiceover, telling the story of his father's
disappointment with his inability to finish college.


Jerry overhears this conversation and asks where Matt went.


Jerry ponders this for a second and says he'll see what he can do, "There's
always a guy."


That's it! Eureka! Are you willing to take no for an answer or see the
world as your plaything, upon which you can leave your mark, moving around
the landscape like the thimble in Monopoly.


Don't think this happens overnight. At one point Jerry was booking acts so
low rent he referred to himself as "Broadway Danny Rose". You know that
movie, right? If not, skip school today and watch it. You can work hard
and never make it. And sometimes your passion for the acts holds you back.


And Jerry doesn't have the elocution of a Yalie.


And he tells his stories mainly with his eyes.


And you can criticize people like this and tell them they're not going to
make it.


But they're the ones who change the world. Because they've got passion and
drive and vision and just won't quit.


I'd say Jerry Weintraub is an original, but that isn't really true. He's a
Damon Runyon character, a Hollywood Hustler just like the moguls of yore.


Who's not afraid to speak to the little people…


Felice is catching up with George Schlatter and Jerry's sitting next to
Billy Crystal and he catches my eye and yells over the table, "Bob, how did
you like the movie?"


That's what a great manager does. Inspire the talent.


And the great managers are loyal to the talent. Will do anything for the
talent. Lie, cheat or steal, it doesn't matter. They're not beholden to
the law, they're beholden to the act.


If you work with someone like this, they're your absolute best friend.


If you're on the other side, you'd better watch out, they can truly be a
nightmare, your worst enemy.


People think it's about marketing, about the big splash, about hundred
million dollar opening weekends and TMZ coverage.


Now you start small. And stay there. You penetrate society and grow, like
a virus, over time.


Jerry Weintraub's documentary will debut on HBO. Not every one of the
service's 30 million subscribers will see it. But some will stumble upon it
and be hooked, others will pull it up on demand and still others will watch
the DVD.


Because if you create something great, something interesting, it lasts.


Jerry's number one act is himself. This is his victory lap.


Pay attention, you can learn something.


Like I said, more than you'll ever learn in school.