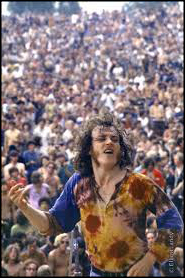 That couldn’t possibly be his name.


In the late sixties America was inundated with British acts, a second wave that was not about hit singles, but albums, wiping away the detritus of the British Invasion and pushing the populace forward via the newly embraced radio format known as FM.


Previously littered with simulcasts and classical music, because of the higher quality bandwidth, suddenly FM was the home to free-format rock, where owners let hippies do what they wanted, the government decreeing that they could not broadcast the same signal on both AM and FM.


Suddenly, we heard Phil Ochs, “Outside Of A Small Circle Of Friends.” And Cream. FM was a club which was accessible to all but only the hippest were members. Seemingly every week there was a new act deserving attention. Including, in 1969, the guy with the indelible cover of “With A Little Help From My Friends.” Joe Cocker, wasn’t that a sexual reference, wasn’t the real name “Crocker,” like the deejay’s, took an untouchable classic and made it his own. His rendition even got a second life as the theme song to “The Wonder Years,” but I’m getting ahead of myself.


Records were expensive. You didn’t own them all, no one could. You were glued to the radio, to hear what you should. And it wasn’t only the Beatles cover that entranced us, but the one by FM compatriots Traffic, that seemingly no one knew until Joe covered it.


Seems I’ve got to have a change of scene


We were looking for more. We were not satisfied with what we had. And it was the music that opened our horizons.


And Joe Cocker took Dave Mason’s reflective number and turned it into a triumph of not only introspection, but exuberance, with the background vocals of Brenda Holloway, Patrice Holloway and Merry Clayton sealing the deal. Joe and his troupe found a groove that was not present in the original, he made the track his own, this was no karaoke star, Joe Cocker was going his own way.


And then we heard he was playing Woodstock.


You’ve got to know, we didn’t think it would happen, it seemed a fantasy, how could all these acts appear on one stage? But just by being included, you knew Joe was cool, he possessed stature.


And the debut LP blazed the trail.


But really, it was all about the second album.


Where do we start?


How about the beginning, with “Dear Landlord.”


Whoa, dear landlord
Please hear these words that I speak


Those words were written by Bob Dylan. “Dear Landlord” was on his comeback LP, “John Wesley Harding.” Which at this time I did not own. I learned the words I recite so frequently from Joe Cocker:


Actually, Joe changed a few words, but the meaning was the same, from back when music could affect your life and change your soul, when it just wasn’t about mindless dancing and money.


Then there was “She Came In Through The Bathroom Window,” which was every bit as famous as the iteration on “Abbey Road.”


Then comes my personal favorite, opening side two, “Hitchcock Railway.” I was at a party last June and writer Don Dunn came up and introduced himself to me, I couldn’t stop testifying how much I loved this song, Joe did the definitive version.


Credit Milt Holland’s percussion and the Grease Band, “Hitchcock Railway” is a tour-de-force.
Then, of course, comes Joe’s rendition of “Darling Be Home Soon.” It was the piano groove that added the magic, taking one of John Sebastian’s best songs and making it Joe’s own. That was his specialty, his skill, the ability to take songs we knew by heart and reinvent them, turn them into something new. Joe took “Darling Be Home Soon” into the stratosphere.


And then, of course, came “Delta Lady.”


You’ve got to know what it was like to hear this come out of the speaker, to not be overhyped, to not find it on the countdown, just a random FM track. This romp that enraptured you immediately and then built to a level where everyone was firing on all cylinders, you couldn’t help but drop the needle on Leon Russell’s composition over and over again.


Yes, Leon Russell. Joe Cocker’s friend and foe all at the same time.
You see not only did Leon provide Joe this signature song, he then constructed the largest band ever to appear on a rock stage, and then utilized the success of the Mad Dogs & Englishmen tour to ensure his own stardom. Joe ended up drunk on the sidelines, he gained weight, disappeared and then stunned us by climbing back up to where he belonged.


I saw the Mad Dogs & Englishmen tour. With not only Joe and Leon with his top hat, but everyone whose name you’d seen in the credits and hadn’t. Everyone from Jim Gordon to Don Preston, to Claudia Lennear to Rita Coolidge, the tour’s other superstar in waiting.


You’ve got to imagine this. Rather than bring tapes or hard drives, rather than faking it, Joe Cocker fronted a veritable orchestra. The double album was a must have. For the rendition of “Cry Me A River,” Matthew Moore’s “Space Captain” and…”The Letter.”


Give me a ticket for an airplane…


Without Joe’s take, the song would never be as famous.


Then came “High Time We Went.”


It was a disappointment. We’d waited, Leon was blazing up the chart, and Joe released his first…dud. It failed on the chart and in our minds, to the point where many stopped paying attention and missed “You Are So Beautiful” and “I Can Stand A Little Rain” when they were released years later, in 1974. That’s right, even back in the album era, people had short memories.


But it wasn’t until 1982 that Joe was truly back, over a decade past his initial success, with a Jennifer Warnes duet that wouldn’t die, the theme song to the Richard Gere/Debra Winger pic “An Officer And A Gentleman.”


Debra Winger was the Jennifer Lawrence of her day, only she radiated more maturity and intelligence. Back when the movies were still an American addiction, when a song could still reach everybody, you could not escape “Up Where We Belong,” it was ubiquitous, not a cover, but an original, composed by a who’s who of writers, Jack Nitzsche, Buffy Sainte-Marie and Will Jennings.


And then Joe’s career was capped, he was ensured a place in the firmament, he was a certified legend.


Yes, the good guys win in the end. Elton John may have made an album with Leon Russell, but it’s Joe Cocker we love and remember.


Of course there were other tracks. Everything from the cover of Randy Newman’s “You Can Leave Your Hat On” to a take on Jackson Browne’s “Jamaica Say You Will.” One of my favorites is “Shelter Me,” from Joe’s 1986 album, “Cocker.”


That’s right, Joe soldiered on, from label to label, album to album, his work always demanded attention, he seemed to gain a second wind, he was running on Sheffield steel.


Another one bites the dust. Another member of rock royalty. Not someone who manipulated the media, but led with his music, imagine that!


Back when a song was enough.


And, of course, the “Woodstock” movie helped cement his reputation, we made fun of his movements. But one thing was for sure, the music lived in Joe Cocker, he had it in him.
And unlike so many stars, there’s not much to say about his personal life, no scandals, nothing to note but alcoholism, which he seemed to recover from so dramatically, at least artistically.


I don’t know. Get old enough and you realize almost no one is remembered. You see it’s all about your own personal experience, what goes in your ears and eyes, what fills up your memory banks.


And way back when records ruled the world, you had to go to the show to get closer to the music, to sustain your soul.


And what more can we ask?