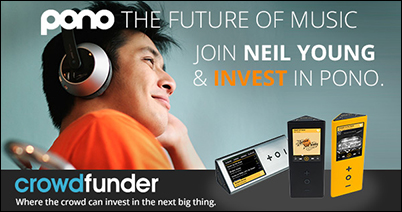 "Old man take a look at yourself"


What if you put out new music and no one cared?


Even better, what if you said you were gonna save the music business and no one cared?


Then you'd be Neil Young.


I'd say he's become a laughingstock, but the people he's playing to, the writers for the somnambulant press, trumpet his every word and neglect to point out his failings.


That's right, they review all his new music, usually giving it stellar accolades. And then when it fails in the marketplace…crickets.


Where's the follow-up story to the Pono disaster? We had to endure endless plaudits for his Toblerone box, how so few paid so much on Kickstarter, Neil appeared not only on late night TV, but at the Salesforce conference. Then the product became commercially available and it made less noise than Peter Frampton's "I'm In You." At least the press castigated Robin Thicke for his "Paula" album, but more people heard that than Pono.


Why does Neil Young get a pass?


Even better, why are we discussing the merits of streaming music?


Streaming music has already won. It's the delivery medium of choice. Primarily on YouTube. To rail against streaming music is to rail something established that ain't going away. Instead, we've got all these irrelevant acts complaining that someone moved their cheese and the hoi polloi is tuning out. And let me let you in on a little secret, you only make money when the hoi polloi LISTEN!


That's your challenge, getting people to pay attention, not pay for music.


If you're worried about people paying for music, you're probably concerned with whether Jenga pieces are made out of wood or plastic. You're so deep in the weeds that you cannot see the forest.


The bottom line is we've got a lot of stuff fighting for attention. Not only other music, but books, video, pornography, sex… Everything is now at people's fingertips, how do you gain an audience?


If you're a middle class artist you're never going to make the money on streaming that you did on sales back in the pre-internet era. Because today all the superstars of all time are within everybody's reach. People don't want to listen to you. And the money is in mass.


And whether you get paid for recordings or not, that's not where the lion's share of the money is. Most of the money is in touring and sponsorships. And will continue to be. Because our whole society is moving towards experiences, that's what people will pay for, human exercises that cannot be purchased anywhere else. That's where Neil Young's been making his money for eons. Just ask Clear Channel/Live Nation, which footed his bill for years. And the reason people come to see him is the music of his past. Which they oftentimes heard through AM radios, with some of the worst speakers of all time. Listening to a low-res stream on Beats headphones is far superior to what Detroit was delivering when Neil Young made his bones. But the truth is, CD quality streaming is already here. That's right, both Deezer and Tidal deliver CD quality music. But most people don't want to pay for it. Either because they can't hear the difference or they believe it's too expensive. Want to solve the
problem, agitate for a reduction in price. Furthermore, Spotify streams in 320. iTunes doesn't even sell at that quality. Are you gonna remove your music from the iTunes Store too, Mr. Young?


If Neil Young were twenty five today, he'd be giving his music away for free. Like Ed Sheeran and David Guetta, who've testified to the benefit of streaming and piracy respectively. These guys know it's a new world. They've adjusted. Neil Young is just coasting on his past. Hey, Neil. Only play your new album at your shows, watch your live business dry up!


Furthermore, don't you see that Neil's got skin in this game, that he's trying to drive Pono utilization, which is like trying to put a Segway in every garage. That's why Neil's making this tsimmis. Sure, he's got a history of worrying about sound quality, but he's also got a history of missing the mark.


As for the rest of you…


You want to make money on streaming music?


Yup, Spotify pays quite well if you're the only rightsholder. Assuming people are listening. But you wanted to make a deal with a major for that marketing and promotion push and now you're bitching about payment. The public does not care. Just like they didn't care about making the Tidal owners rich. This is inside baseball, take your complaint off the homepage, you're only muddying the water, you're driving people FROM streaming, and your only hope is to get people to stream. CDs are dead. Most computers don't even come with a disk drive anymore. As for files… Why don't you try selling 45s while you're at it.


Just shut up. Stop trying to line your personal coffers and get in the pit with your audience. How does this help your audience Neil, if they can no longer hear your music? But they can! On YouTube for free, which sounds even worse! Or they can steal it! But the more difficult you make access, the more marginal you become. You're old, you can run on fumes, but anybody following your lead is brain dead.


But let's admit that streaming is here to stay. And sure, we want people to pay for it, but the truth is we're building careers. And careers rain down money. And if you've got a career, you're set.


Neil already has his.


But how about the people who don't?


They should embrace streaming, they should tell everybody to sign up. They should make access to their music cheap and easy. And argue about the division of revenues off the field.


P.S. Remember when AC/DC wouldn't be on iTunes? Now they're not only there, but streaming services too. History tells us these transitions are momentary kerfuffles and only those who can't see the future or are waiting for a paycheck hold out, oftentimes to their detriment.