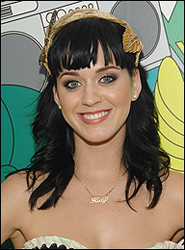 Maybe the music business needs to hire Tony Soprano, or his real life Mafia counterpart, to teach it how to conduct business in SECRECY!

In case you've been out of wireless range, in case you haven't been in front of a computer, I'm here to tell you the big story online today is Katy Perry's tour rider.

Wherein she not only delineates the insane demands of an evanescent diva, she reserves the right to scalp her own tickets.

Yes, it's very clear, and it's right here:

If the legalese bores you, you can get an overview here:

Huh? You put this in writing? Have you never heard of the Internet? Where all your flaws and bad behavior will not only be revealed, but analyzed?

You're building your reputation every single day.

And speaking of said reputation, if you've got the time, watch Chris Sacca's commencement address at the Carlson School of Management:

I know Chris a little bit. We've butted heads. I think he's a bit too self-confident and self-impressed. But he is smart. And he knows what's going on in the online world.

And what I love best about his speech is where he says he never hires from a resume. He Googles you, sees what you're into, checks out your last few years of behavior.

It's only old farts and dishonest pricks who are afraid of the Internet.

I hate LinkedIn, because I can't stop the constant invitations, even though I'm not a member. I hate a company that's built on being a scumbag.

But I've run into person after person who says they won't hire anyone without a LinkedIn profile. They want to know who you ARE!

And speaking of who you are, hang in there long enough in Sacca's speech where he says the financial rapists have trouble sleeping at night. They're constantly trying to justify their behavior, but we're not buying it.

Sacca didn't fall into success. He created a hedge fund when he was twenty five and made $12 million but soon found himself $4 million underwater during the dot com crash.

Funny how Chris is risking and no one in music, on either side of the stage is.

You want to make it?

Don't e-mail me your track. Let me Google you and find out I've missed something great.

Don't be like Katy Perry. All about the money. Hell, if only she were more concerned about getting tickets into the hands of fans instead of making money.

Be happy, be equitable, be a leader.

And then you'll have followers.