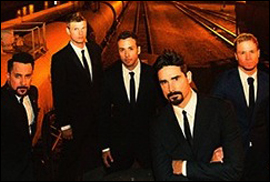 CHICAGO (CelebrityAccess MediaWire) — While performing at the FirstMerit Bank Pavilion for the sold-out opening show of their current tour, The Backstreet Boys were unceremoniously interrupted mid-song when the band's mics were cut, leaving fans without an encore or even the rest of the interrupted song.

In a video posted on the band's Facebook page the following day), singer Kevin Richardson said, "We got shut down five minutes shy of the finish line, so we're so frustrated, and we're going to figure out how to make this right."

After initial speculation that it was either the Chicago Police, or the Park District, which oversees the FirstMerit Bank Pavilion, who pulled the plug, the venue's management team revealed that the decision to cut the mic ahead of the venue's 11 PM curfew was based on a late start by the band due to the complexity of their production.

"As has always been the case, the Backstreet Boys production is unlike anything else on the road. Getting this new, state of the art show ready, however, caused the doors to be delayed and the beginning of the show to be pushed back. FirstMerit Bank Pavilion has a strict curfew of 11:00 PM. Given the artist was running behind on setting their production up, the show had to end before the set could be finished.

There were erroneous reports of the Chicago Police shutting the show down. The venue on Northerly Island is bound to an ordinance that requires all performances to conclude prior to 11:00 pm. Venue management worked with the artist to complete their show within the allotted time and, when the show exceeded the curfew, the artist was asked to conclude the show." – CelebrityAccess Staff Writers