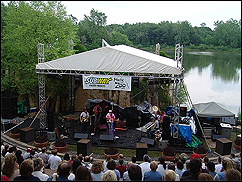 (CelebrityAccess MediaWire) — At the Minnesota Zoo's Weesner Amphitheatre, the bird do their shows three times a day. During the summer for 23 evenings, the musicians do their show right after the birds.

The zoo has been putting on concerts since 1992, when soft-rock acts like The Nylons and Randy Newman first performed in the park. When Minneapolis concert promoter Sue McLean took over in 1995, the venue became more aggresive in booking its acts despite some tripdation about having rock concerts opposite the tigers exhibit and in front of the tropical birds.

"They really like funk, and blues is their second choice," McLean told the Minnesota Star Tribune.

The concerts are limited to a modest 85 decibels to keep the noise from overwhelming the animals.


Sharing the 1,500-seat venue with the animals can create some issues for the touring music stars. For each concert, the stage and roof must be erected after the final bird show, then the band can begin setting up equipment.

Before one concert last season, a trained bird refused to return from a tree near the stage, so the band couldn't set up as scheduled. The group's road manager complained to the band's agent in Los Angeles, who phoned McLean.

"We delayed the soundcheck," she recalled to the paper, "but the show went on, on scheduled."

Dave Cruz, supervisor of the bird shows, told the Star Tribune that the birds recognize songs that are part of their daily show, including some U2, Hank Williams and Keb' Mo'.

"We make sure there's no curse words," Cruz said, so the birds won't parrot the lyrics.

The concerts present no real problem for the birds, which are accustomed to loud noise all day long, Cruz explained.

"If you can deal with 200 grade-schoolers in the day, you can put up with a little funk in the evening," he said.

The summer schedule has a serious list of major touring groups. All shows begin at 7:30 and end by 10:30.

The complete schedule, including the six concerts that have already passed, is as follows:

July 31: Aimee Mann with the Honeydogs

Aug. 19: Kasey Chambers with the Greencards