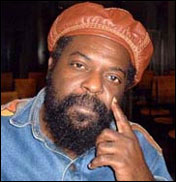 LONDON (CelebrityAccess MediaWire) — Jamaican reggae singer Junior Delgado has died in London at the age of 46.

Famous for his “roots reggae” style, his most popular songs included “Sons of Slaves,” “Raggamuffin Year” and “Away With Your Fussing and Fighting.” In 1985, he released the album “Broadwater Farm,” which predicted violence in a north London housing estate. A riot broke out in the area shortly afterwards, leading to the record being banned.

A spokesman told The BBC News that the death had been unexpected, but was believed to have been from natural causes.

Born Oscar Hibbert, in Kingston, Jamaica, he recorded under his nickname, taken from the Spanish word for “skinny.” –by CelebrityAccess Staff Writers