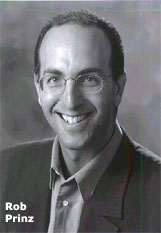 Veteran music agent Rob Prinz (PGI/AGI, CAA, William Morris) has joined United Talent Agency to head up the talent and literary agency's newly formed booking and touring division as well as expand the agency’s music representation business. Clients joining him at UTA are Celine Dion and Ricky Martin, the latter, which until now was also non-music UTA client. Agent Nikki Wheeler, a longtime associate of Prinz, will also join him at UTA.

"Rob has an unparalleled reputation and presence in the music industry. He is a leader not only in identifying and cultivating new talent, but also moving existing stars to their next levels," said Jeremy Zimmer, UTA partner and Board member. "We look forward to his strong leadership in bringing UTA’s music representation to the forefront of the industry."

"This is a fantastic opportunity to do what I love, which is represent music artists, at one of the best agencies in the industry," said Prinz. "This is a great environment in which to establish a serious and competitive music business."

Prior to CAA, Prinz spent eight years at the William Morris Agency where he headed the East Coast Contemporary Music Division.

UTA also currently represents clients such as Madonna, Eminem, and Janet Jackson in areas outside of music.

UTA’s music division recently announced the upcoming 20-city tour of “Down from the Mountain,” featuring musical contributors to the No. 1-selling soundtrack of O Brother, Where Art Thou?, directed by UTA clients Ethan and Joel Coen. The tour is a joint production between UTA, Immortal Entertainment, Metropolitan Entertainment and the House of Blues.