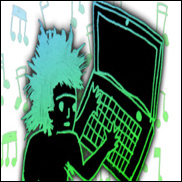 CAMBRIDGE, MA (Hypebot) –
Getting A Song Onto Gaming Platforms Is About To Get Easier

Music is an essential part of gaming and enjoying music long side games increased exponentially with the popularity Rock Band and Guitar Hero. Until now, however, most indie and d.i.y. musicians have been shut off the gaming console.

Artists can set their own price from 50 cents to $3 per track and will receive 30% of any sales. But there enough technical hoops to jump through that most artists may want to let their distributor or other third party do the heavy lifting. The new platform will launch in open beta in late August and offer a toolset with detailed documentation on how bands can begin authoring songs into Rock Band gameplay files. Authors will be able to submit tracks for playtesting and peer review via a specialized Web site, creators.rockband.com. Publishers will also need membership in Microsoft's XNA Creators Club Online in order to test and publish game content. The service will only be available to those who purchase a premium membership to Microsoft's XNA Creators Club for four months at $49.99 or for a year at $99.99.

"The Rock Band Network enables songwriters and musicians – at any stage of their careers – to create their own paths through the interactive music realm," said Paul DeGooyer, Senior Vice President, Electronic Games and Music, MTV Networks Music Group. "Our download store has been an extraordinary success, and it's exciting for us to provide access to our platform through this uniquely elegant solution."

The service will launch to only Xbox and PlayStation users, but other platforms are expected to be supported soon.