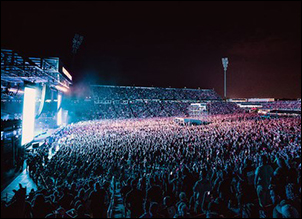 COLUMBUS, OH (CelebrityAccess) — The 11th annual Rock On The Range has wrapped, with festival organizers reporting sell-out crowds despite challenges from weather and the event's lineup.

Festival organizers said that more than 135,000 fans turned out for the three day music festival, which took place from May 19-21st at MAPFRE Stadium in Columbus, OH.

The weekend was beset upon by inclement weather that necessitated delays, rescheduled sets and temporary evacuations,

Rock on the Range was also forced to deal with last minute changes to their headliners following the death of Soundgarden frontman Chris Cornell last week. Soundgarden had been slated to close out the festival's first night. Despite the band's understandable abscence, Cornell drew many tributes from the remaining acts that included a brief acoustic set from Stone Sour’s Corey Taylor and Christian Martucci that included moving covers of Pink Floyd’s “Wish You Were Here” and Temple Of The Dog’s “Hunger Strike.”

Other acts that marked Cornell's passing included The Pretty Reckless, who covered Audioslave’s “Like A Stone”; Bush, who performed Soundgarden’s “Black Hole Sun,” into a cover of R.E.M.’s “The One I Love”; and Alter Bridge, who played the opening of The Beatles’ “Blackbird” as a tribute to Chris and then went into their own song of the same name.