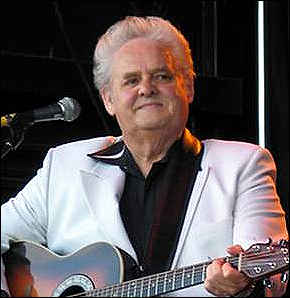 In the month of October, Adams will be featured in the Public Radio International (PRI) series, Whole Lotta Shakin’. The series comprises ten one-hour documentaries that explore the artists and artistry of rockabilly – the foundation of rock and roll. Adams is the first voice heard in the ‘teaser’ at the beginning of every show, along with Barbara Pittman, Carl Perkins, Janis Martin and Eddie Cochran. He is quoted in the series opener, ‘Good Rockin' Tonight,’ and his story is told in the fourth installment, ‘Rebels with Guitars.’

Also in October, Adams will fulfill a lifelong dream when he and his band, The Rock-A-Teers, will perform in the Rotunda of the Country Music Hall of Fame and Museum, at ‘Rhythm of the Road,’ the 12th Annual International Adopt-A-Highway Association Conference, on October 25. The concert will also feature the reunion of Mountain Harmony, a vocal trio comprised of his three daughters, Tina, Janetta Darlene, and Teresa.

Adams has already gotten a good jump start on his anniversary festivities. He recently returned to England for a third time where he performed two successful shows at the Americana International Festival, in Newark, Europe’s largest ‘American lifestyle’ music and cultural event. Adams delivered the goods to his rockabilly and rock ‘n’ roll fans during the first show, and it was a proud moment for him he introduced daughter, Janetta Darlene to his European fans, who welcomed her with open arms. For his gospel show, Adams had the crowd singing along with him when he and his group performed as special guests on George Hamilton IV’s annual Sunday morning concert.

In the late-50’s, Adams released a series of rockabilly and rock ‘n’ roll recordings on Quincy, Dot and Nau-Voo Records. Including ‘Rock, Pretty Mama,’ his best-known recordings from that era include, ‘You Heard Me Knocking,’ ‘You Gotta Have A Duck Tail,’ and ‘Return Of The All American Boy.’ In the early 60’s, Adams received his calling into the ministry, where he concentrated his efforts on writing and recording gospel music. In addition to dozens of single and album releases of his own, Adams’ material has been recorded by numerous artists, including The Happy Goodman Family, who took his song, ‘I Saw The Man’ to the top of the gospel charts in 1974.

Until recently, Adams’ contributions to early rockabilly and rock ‘n’ roll had been overlooked – and due to a mix-up with another artist by the same name, he was believed to be deceased. Adams put those rumors to rest when he released his 2000 rockabilly ‘comeback’ record, Legacy. With that, music scholars and fans from Europe and the U.S. began to rediscover his early music. In 2002, he was the focus of a career retrospective, Rockin’ Thru The Years, issued on Sanctuary Records. Since then, he has been featured on several major label compilations, alongside legendary figures such as Elvis, Roy Orbison, Jerry Lee Lewis and others. Musicologist Colin Escott summed Adams up best in the liner notes of Rockabilly Riot: ‘He is now one of the great exponents of rockabilly from the golden era.’ –by CelebrityAccess Staff Writers