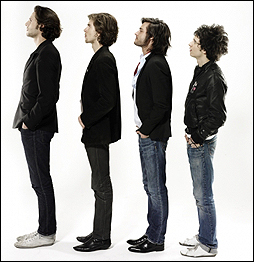 NEW YORK (CelebrityAccess MediaWire) — New wave punk phenomenon 'Rock&Roll' will be featured in the ad campaign for Roberto Cavalli's Spring 2008 Men's Collection. The fashionable rock band, whose new EP 'Losers, Boozers, Jacuzzi Users' is available now on iTunes, will be the next in a long line of fashion icons and high-profile celebrities to be added to Roberto Cavalli's roster of models. The campaign, set to begin its run this month, will be featured worldwide including Europe and the US. The former Cavalli face for the Men's Collection was the famous brit rocker Pete Doherty.

The English-speaking new-wave marvel from Paris is reminiscent of The Ramones, The Strokes, Elvis Costello and Jimi Hendrix and was once described as “1965 Bob Dylan meets 1971 'Sticky Fingers' era Rolling Stones with Ron Wood's flair and Billy Idol's sneer.” Managed by David Sonenberg's DAS Communications (The Black Eyed Peas, The Fugees, Fergie, Meat Loaf, Wyclef Jean, John Legend, The Spin Doctors), the band's limited edition four-track EP First Class Plane debuted at #15 on iTunes last year, and sold out their supply of hard copies within one month. Already rock stars in France and Italy, 'Rock&Roll' is quickly gaining popularity in the UK and will soon head into the studio to record their full-length US debut. Currently playing a number of specialty VIP showcases across America, the band has formerly shared bills with a multitude of heavy hitters including The Buzzcocks, The Saints, We Are Scientists, The Editors, +44, The Shout Out Louds, The Thrills and Louis XIV, among others. –by CelebrityAccess Staff Writers