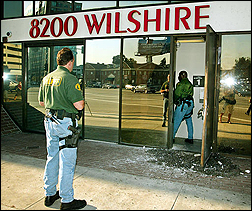 LOS ANGELES (AP) — The head of Death Row Records is playing it off as no big deal, but it appears somebody has a beef with someone who does business there.

Someone fired several bullets at the Death Row label offices in Los Angeles. No one was hurt in the shooting early Tuesday but the bullets damaged the front door, windows and walls of the place. Police told the Los Angeles Times the shooting was a drive by and that some law enforcement officials believe the attack was carried out by members of a street gang who have issues with Death Row founder Suge Knight and/or his associates.

But Knight himself isn't buying into that theory. In a news release issued late Tuesday, he said some of the label's artists have "a lot of girls flocking to them at the studio and at the clubs," and he believed the shooting was "probably committed by a jealous boyfriend or a jealous husband."

The shooting at Death Row Records comes as law enforcement officials are keeping a close watch on major players in the rap game on both the East and West Coasts. Sources said the Death Row drive-by may be the latest in a series of incidents involving a rivalry between the Mob Pirus Blood gang and two other factions of the gang. The paper said at least two of Knight's close associates have been killed in recent years.

Earlier this year, Knight finished a 61-day jail sentence after a state prison board found he had violated his parole. The violation was for associating with a known member of the Mob Pirus Blood gang.

Last year, officials looking into a murder in Compton raided several locations linked to Knight, including the Death Row offices.