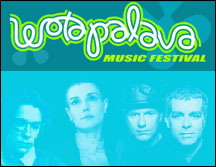 Even with her name prominently displayed in the second headlining slot in the ads and on the eve of the press conference for the Wotapalava tour, Sinead O'Connor dropped a last minute bombshell. She has dropped off the tour.

A tersely worded statement by the concert organizers, the Pet Shop Boys and CAA, reads as follows: "Sinead O'Connor is contracted to perform on Wotapalava just before the Pet Shop Boys. We have been told today that due to unforeseen family commitments, she is not available for the majority of the dates."

After the press conference, Pet Shop Boys manager Merck Mercuriadis (Sanctuary Music Group) advised Celebrity Access that they are already looking for a replacement artist, or artists. "She will let us know what shows she can do," he said, but in reality, there is a likelihood that she will not be on the tour at all. There is no intention of a lawsuit either.

The Pet Shop Boys have been planning this 18-city North American shed tour (with various promoters), for the past three years, and would like to make this is an annual summer tour. There are no international plans for the tour at this time.