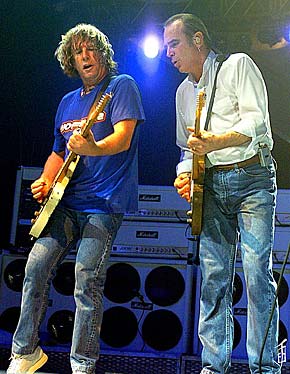 The rock band, which is currently on their ‘Never Say Never’ tour, has been forced to cancel three dates after a painful elbow prevented Parfitt from playing his electric guitar.

The rocker's elbow became inflamed on Monday while rehearsing for the band's Carlisle gig, which was the first date to be pulled.

Doctor's blame repetitive strumming of the bands hits, which include Rockin' All Over The World and The Wanderer, for Parfitt's problem.

All the concerts affected, which include Grimsby and Leicester, have been rescheduled for dates in February.