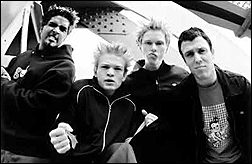 (CelebrityAccess MediaWire) — Rock band Sum 41 arrived back in Canada following ten days in the eastern region of the Democratic Republic of Congo, where a sudden outbreak of violence between government soldiers and troops loyal to a renegade commander forced their early departure from the war-torn country.

Sum 41 was in Congo filming a War Child Canada documentary concerning the impact of the longstanding civil war on Congolese children. Since 1998, more than 3 million people, mostly women and children, have died in the conflict. The United Nations has more than 8,000 peacekeepers deployed in the Congo. During their 10-day trip, the band members met with former child soldiers, girls who had been raped by soldiers and rebel fighters, UN and aid agency officials and many other Congolese victims of war.

"We went to Congo to show people what war is like, how harmful it is to civilians, and we ended up becoming war-affected ourselves," said drummer Steve Jocz.

"Our being there, hearing
the bullets around us, the mortar fire, the injured being brought in for medical treatment, it reinforced our belief that more must be done to prevent war and protect innocent civilians," said lead singer Deryck Whibley.

The recent violence took place in the town of Bukavu, near the border with Rwanda, where the group was filming their war-related documentary. Until the current outbreak of fighting, Bukavu had been calm under a United Nations brokered peace accord that paves the way for democratic elections next year. When fighting intensified in the part of the town where the group was staying, band members were evacuated in armored personnel carriers and transported to the UN peacekeeping headquarters for eastern Congo. The band was joined in the heavily guarded UN compound by more than 300 Congolese civilians, aid workers and UN staff seeking refuge from the escalating violence. War Child Canada staff accompanying the team then put into place an evacuation plan that included safe UN passage through the embattled town to the local airport, where they were flown by chartered aircraft to Uganda. The nine Canadians, including the four members of Sum 41, their tour manager, a music video director, a documentary filmmaker, War Child Canada's Executive Director Samantha Nutt and the charity's President Eric Hoskins, both medical doctors, were safely evacuated without incident. No one in the team was hurt.

"While security is always our number one priority, no one, not even in the United Nations headquarters in Bukavu, predicted this sudden outbreak of factional violence. It happened without warning," explained War Child Canada President Dr. Eric Hoskins. "We are grateful to the United Nations, the Government of Canada and our many friends and colleagues who mobilized themselves and worked tirelessly to ensure our safe evacuation and return to Canada."

Guitarist Dave Baksh commented, "While we would never wish this experience on our worst enemies, we came through this crisis stronger and convinced way more than ever that war is a stupid aspect of life and that we have to work harder to stop the slaughter of innocent civilians, support aid to war-affected people, confront the arms traders, and help build on the work of the United Nations."

"The Congo is a beautiful place

with a horrific past and is dangerously close to reliving this again with its current state," added bassist Cone McCaslin. "The Congo needs our help."

Sum 41 and War Child Canada hope their documentary will help others realize how devastating war can be and empower viewers to work towards eliminating the causes of war. War Child Canada is a registered Canadian charity that provides humanitarian assistance to children affected by war. Working with local partners, the charity has humanitarian and development projects in approximately 10 war-affected countries. Working closely with the music industry, War Child Canada also generates awareness, support and action for children's rights everywhere. –Bob Grossweiner and Jane Cohen