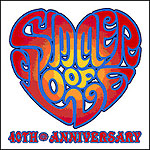 San Francisco, CA (CelebrityAccess MediaWire) — The Summer Of Love 40th Anniversary Concert will take place on Sunday, September 2, 2007, in San Francisco's Golden Gate Park between 10AM and 6PM. The concert will be a free event celebrating both the music inspired by the 1967 Summer Of Love and the consciousness raising efforts of the time. The organization securing the permit, the non-profit Council of Light, includes members of the original Family Dog, original Grateful Dead management, FM Radio programmers, and many of the era's poster artists.

Former Family Dog partner and longtime Chet Helms associate Boots Hughston is serving as coordinator. Former Grateful Dead manager Rock Scully, along with former president of CTI Records and manager for Jesse Colin Young, David Bean, are organizing bands, licenses and sponsors. The promoters intend to utilize the best in concert production for the musicians involved, from sound, to stage, to travel and lodging. While noted musicians from the era will be featured, organizers welcome bands from the past four decades inspired by the San Francisco music scene of the 60's. It is anticipated that there will be worldwide media coverage with live broadcast and streaming possibilities.

The Summer Of Love 40th Anniversary Concert is intended to not only celebrate the music, but also resonate with the consciousness raising of the 60's as represented by eight goals chosen to receive donations and publicity from the concert. They are: Environmental Sustainability, Relieve Poverty & Hunger, Raise Education, Promote Gender Equality, Reduce Child Mortality, Improve Maternal Health, Combat AIDS, and create a Global Partnership for Development in undeveloped nations. Charities chosen by the Council Of Light representing these 8 Goals will receive all money raised beyond basic costs of the production.