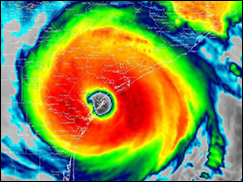 (CelebrityAccess) — While Hurrican Harvey has been downgraded to a tropical storm, the Gulf Coast of Texas is still grappling with the aftermath of heavy flooding that has affected the region.

CelebrityAccess has compiled a list of venues and events that have been affected by this historic storm. If you're aware of a venue that is not included below, please drop us a line at news@celebrityccess.com

The SMG managed American Bank Center in Corpus Christi report that they are currently working to restore services for upcoming events and regular business hours and the Texas Trophy Hunters Association's planned Hunting and Fishing Extravaganza event has been postponed.

"We have had some flooding on the service level, which is the area down by the grounds' crew, where the ramps come in. So, nothing that's fan facing. We've had a team of 30 people that have been there since Friday living in the stadium. They have performed water extraction and blockage with sand bags every time we had major downpours and water was getting in the building.

"These guys have been doing great work over there. It's a lot of the people on our stadium operations crew. They've been working their tails off over there to make sure that the stadium is ready to go."

The Chronicle also reported that NRG Stadium, home to the Houston Texans was intact. According to the Chronicle, the area around the stadium had been affected by flooding but the stadium remains undamaged.

The Texans and the NFL are currently weighing their options ahead of the team's Sept. 10 season opener. Cowboys vice president Stephen Jones has offered to host the game at AT&T Stadium but the NFL makes the final call on when and if games are played in the face of adverse weather conditions.

The House of Blues in Houston is closed until Friday but anticipates reopening in time for a concert by Buddy Guy on Sept 2nd. Affected concerts include Sherita Perez and The Cosmic Cats, Lord Huron, Boykin Brothers, and Steve Gilbert.

Houston's Alley Theatre has been 'severely impacted' by Hurricane Harvey and has canceled the remaining shows of the production of Alfred Hitchcock's The 39 Steps, which was due to run through Sept. 3rd.

The Rooftop Lounge announced that the scheduled show by La Fiebre on August 31st has been rescheduled.

Experimental music venue Super Happy Fun Land announced that they will be closed until at least August 31st due to the storm.

Houston's Last Concert Cafe reported that they will remain closed until the roadways are safe to travel again.

The Humble Civic Center & Arena is currently serving as a shelter for displaced Texans and has requested volunteers, as well as contributions of blankets and food.

Baseball park Constellation Field, located in Sugarland, Texas, has also been retasked as a shelter and temporary staging area for refugees from the storm.

The Houston Toyota Center announced that due to Hurricane Harvey, the Emmanuel & Mijares concert, originally scheduled for Thursday, August 31st at Toyota Center, has been postponed.

Donations to assist with the vast need following the devastating flooding can be made through the United Way at http://unitedwayhouston.org/flood or text UWFLOOD to 41444.