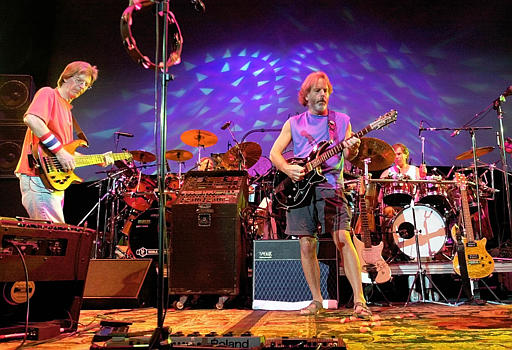 When The Dead members – Mickey Hart, Bill Kreutzmann, Phil Lesh, and Bob Weir – tour together for their first summer tour since Jerry Garcia's death, they will be joined on the road by such luminaries as Bob Dylan, Willie Nelson, Steve Winwood (who will perform with their own bands as well as sit in and perform with The Dead during each of their respective shows), and Grateful Dead songwriter Robert Hunter. Also performing as a new member of The Dead is Joan Osborne (CelebrityAccess, April 6, 2003).

Kicking off their four-hour, two-set Summer Getaway Tour on June 15, it
will include Grateful Dead classics like "Fire on the Mountain," "Uncle John's Band" and "Box of Rain" in addition to new material. Winwood will join the band June 17-25 while Willie Nelson & Family co-headline June 27-July 4, where Nelson's last date on the tour will take place at his famous 4th of July picnic in Austin, Texas.

The tour's second leg runs July 29 – August 10 with Dylan co-headlining. This marks the his first time playing with the former Grateful Dead members since he and group toured together on a sold-out stadium tour in 1987.

Rounding out The Dead are keyboardists Jeff Chimenti and Rob Barraco and lead guitarist Jimmy Herring.