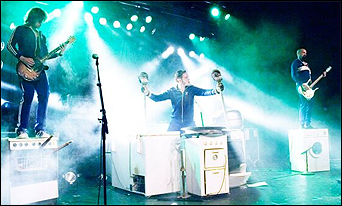 The band is Hurra Torpedo; an incredibly popular rock band from Oslo, Norway, made up of of Kristopher Hugh Martin Schau on appliances (oven, dishwasher, washing machine, boiler, deep freezer and refridgerator), Egil Hegerberg on bass, guitar and vocals, and Aslag Gottormsgaard on guitar, back up vocals and other appliances. In the United States, this actual band has become a fictional bewilderment.

Following an incredibly contagious viral marketing scheme, led originally by an internet video of the band performing the Tyler song on Norwegian entertainment show “Lille lørdag,” which has since become the #1 most popular video at iFilm, agents across the country have been trying to piece together the story behind the phenomenon.

A New York to Los Angeles tour sponsored by the new Ford Fusion midsize car has been chronicled by mock-rock-documentary filmmaker Pip Simon at http://www.thecrushingblow.tv, roadie Wendell Jackson’s blog at Yahoo 360, an incredibly popular MySpace site, and the band’s official website at www.hurratorpedo.com.

The efforts are a mix of real elements, such as the band and its performances, with fictional stories and some scripted video.

The story goes that the band was signed by fake booking agent Gabe Frazzelblatt, and Frazzelblatt Entertainment, who’s website lists other acts including “The Donkey and Llama Kissing Show” and “Flying Cat Circus” as some of his party performers. Coincidentally, Gabe’s brother Abe owns a Ford dealership, and let the men of Hurra Torpedo use a 2006 Fusion to travel the country. After the tour, it will be given away to a sweepstakes winner.

The story is the creation of Ford’s advertising agency J. Walter Thompson, where an employee caught the internet video and devised the perfect strategy to attract the target audience for the new vehicle.


Linda Perry-Lube, Ford’s car communications manager, told advertising industry site ClickZ, “We really believe that we are in the right place by being on the Web and knew we could capture the imagination of Generation X if we had really good storytelling.”

Ford thought having the band play oddball places, ranging from The Roxy in Los Angeles to The Big Texan (home of the 72 oz. Steak dinner) in Amarillo, Texas, to a Sigma Theta Delta party in Chapel Hill, North Carolina, would engage the target audience in humor, while the videos from the shows and the road would go viral and consistently attract more interest.

“It’s designed as a branded entertainment to give great storytelling and a little bit of surprise and delight to the people who might not tune in to the more traditional type of advertising,” said Perry-Lube.

Attracting more than just the young fans Ford was hoping for, agents throughout the business have been debating on the reality of the group, hoping to sign the popular band for a 2006 tour.

“I have been getting calls every day,” Mads Martinsen of Pilot Management A/S, told CelebrityAccess, verifying the reality of the group. “I have been working on setting up the next tour, but have not made any decisions yet who will be involved.”

Martinsen, the group’s agent in Oslo, Norway, said the band was incredibly successful in Norway, which helped to spread the word in the U.S.

“They got their big break here when they played ‘Total Eclipse of the Heart’ in the 1990s on live television,” said Martinsen. “ Now Kristopher (the appliance percussionist) is one of the biggest stars in Norway.”

Martinsen said the band originally started in 1993 in Schau’s basement in a ghetto section of Oslo, where the band mates would play on whatever they had lying around. Since, their rise to stardom has been unstoppable, as was evident with the U.S. marketing campaign. The tour and campaign were the efforts of Ford, JWT and production company Radical Media.

The viral campaign touched on every aspect of the band’s tour, including a downloadable technical rider on the Frazzel Entertainment page (which includes two toasters, two washing machines, multiple stoves and a large casserole). In a video of the band’s first meeting with their new manager (Gabe’s nephew Ted), he displays his enormous marketing chart, with his basic ideals: “If you do things the way other people do’em, you’re gonna get the results that other people get. But I want to get a different type of result. I wanna have a high level of success with a minimal amount of effort.”

While Ford also helped promote the tour by advertising on lifestyle-oriented sites like AOL Instant Messenger, Comedy Central and CollegeHumor, they are most interested in getting the target audience to share the content themselves.

“We’re really monitoring what’s going on virally,” said Perry-Lube, noting that Hurra Torpedo has been mentioned on numerous blogs. She said Ford has even been getting phone calls from people looking for the band. “We clearly are getting the sense that it’s generating a lot of online buzz.

Ford plans to keep the videos online as long as there is interest from the audience, event though the tour has been completed. There has been talk of sponsoring the band if they return for a second tour or re-purposing the video for use in other digital marketing efforts.

“We still have a lot of legs to this campaign,” said Perry-Lube. “We’re starting to feel the groundswell.”

As for the rabid response the group in the states, Martinsen said it couldn’t have gone better.

“I think that video was seen hundreds of thousands of times in a few days,” he said. “We were amazed.”