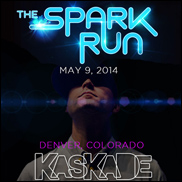 DENVER (Hypebot) – DJ Kaskade yesterday announced an interesting approach to a 5K run that seems influenced by The Color Run. There will be activities at the "pre-run plaza", a 5K run in which costumes and glowsticks are encouraged and a concert to follow. Kaskade will run in the 5K in Denver and perform afterwards. Other U.S. cities will follow though it's unclear who will perform at those locations.

Kaskade took to Tumblr to announce The Spark Run.

Kaskade explains he "had the opportunity to partner up with some friends and create The Spark Run" which he then describes:

"The Spark Run is what in the past people have called a 'fun run'. But we’ve updated this business. We are here to celebrate originality. This run encourages costumes, glowsticks + LED’s. You don’t have to be a runner to enjoy this. Register, show up early, take part in the activities, then walk the 5K with a bunch of friends."

"Obviously (you know me, right?) theres an after-party with live performances. Get down with the community of people who just shared the same experience. And if you are a runner? Get in there! Running at night, on a course like we’re creating is incredibly satisfying."

Kaskade will run and then perform in Denver, May 9. He states:

"We will have the sound loud and lights lit. You will know you’re at the finish line, friend."

It does sound like fun and I don't think it detracts from what Kaskade and company are doing to say that The Spark Run sounds a lot like The Color Run especially if you compare their illustrated maps.

The Spark Run sounds like a fun idea and could well be a real business not unlike The Color Run.