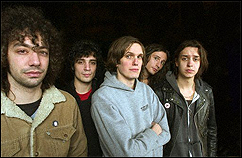 (CelebrityAccess MediaWire) — The Strokes have been added along with the Kaiser Chiefs, The Raconteurs, Editors and Death Cab for Cuties to this year’s Roskilde Festival, set for June 29-July 2, 2006.

Founded in 1971, the legendary Roskilde Festival attracts 75,000 people annually to the event, which takes place 25 miles outside of Copenhagen. –by CelebrityAccess Staff Writers