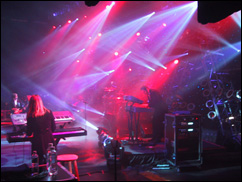 JACKSON, MS (CelebrityAccess MediaWire) — While performing at the Mississippi Coliseum in Jackson, Mississippi the Trans-Siberian Orchestra came to a sudden halt in mid-show, during their seasonal rock Christmas concert, when the city’s power grid went down, reportedly due to the strain from the show.

The experience was recapped by violinist Anna Phoebe in a blog update:

"WOW!! Our first matinee day of the tour! And we make the show even more memorable by blowing the entire power during 'Good King Joy'! First ever time in TSO history!! Hilarious! The first 3 seconds you think it's just the monitors in your ears or on the stage, then the lights all went out then we started looking around and then realized it was EVERYTHING! Except the spotlight on Al! We kind of left the stage – the arena was SILENT…15 minutes later (just when the slow clapping had started) they manage to get the extra generators going and we went on as normal.

I tell you – there is nothing so eerie as going from 100 or so decibels to SILENCE in a split second in a huge space filled with thousands of people. Spooky!!

The audiences were FABULOUS and LOUD both shows! I love it when it feels a little bit more like a rock show rather than a 'concert'."