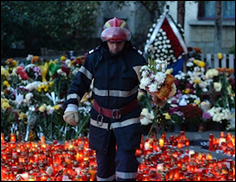 BUCHAREST, Romania (VIP NEWS) — The drummer of a heavy metal band playing when a fire broke out at a nightclub has died, bringing the death toll from last week`s tragedy to 45.


Bogdan Enache, drummer in the Goodbye to Gravity band that was playing in Colectiv on Oct. 30, died on Sunday evening (Nov. 8), said the medical director of the state burns hospital, Cristian Nitescu.


Enache was being transported on a military plane to Zurich, Switzerland, on Sunday afternoon for treatment for his burns, when he went into cardiorespiratory failure, the Interior Ministry said. The plane headed back to Bucharest, while medics tried to resuscitate him for 70 minutes. He died after he landed in Romania.


Dozens of people injured in the blaze remain hospitalized with serious burns as authorities warn that the death toll could continue to rise.


Romania continued to send the injured to other countries for treatment. A plane from NATO arrived in Bucharest late Sunday and will take a number of the injured for treatment overnight to Britain and Norway, emergency situations official Raed Arafat said.


In recent days, a total of 21 injured people have been transported to hospitals in Belgium, the Netherlands, Austria, Israel and Germany, the health ministry said.


A fire broke out at the Colectiv nightclub during a concert by the heavy metal group, after a spark from a pyrotechnics show ignited foam decor. The band`s two guitarists died last week from their injuries.


In another development Sunday, President Klaus Iohannis appeared at protest staged by a few hundred people in University Square, now in its sixth consecutive day. Iohannis, who was surrounded by security staff, was booed by demonstrators who shouted "Resign!" He spoke to a few protesters and left after less than half an hour. Iohannis has called on Romania`s civil society to take part in consultations for a new government.


"I saw revolt (in the square), but also hope that things can change," Iohannis said. "I told people to stay involved, that only together we can all make Romania the country we want it to be," the president said in a posting on his Facebook page.


Prime Minister Victor Ponta and his Cabinet resigned Wednesday after mass protests, which have continued this week.


Enache`s death was the fourth reported on Sunday. Nitescu earlier reported that a man had succumbed to his injuries at the state burns hospital late Saturday.


Mediafax news agency reported two other patients died early Sunday at the Floreasca Emergency Hospital, including a Turkish man studying in Romania, and a woman who worked at the club`s bar.


Nine deaths were announced Saturday, the highest number for a single day. –According to Billboard