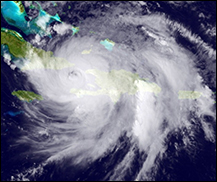 MIAMI (CelebrityAccess) — As residents in the southeastern US batten the hatches ahead of the approaching Hurricane Matthew, news about canceled and postponed events has started to come in.

The opening date of Luke Bryan's 2016 Farm Tour has been canceled.

"Due to the Hurricane Matthew evacuation orders that begin on Wednesday in the coastal areas of South Carolina that will impact the traffic routes to the farm, the Luke Bryan Farm Tour 2016 at Culler Farms in Gaston, SC tomorrow, Oct 5, will be canceled," said a post on Bryan's website.

Garth Brooks Thursday night performance at the Amway Center in Orlando has been postponed until Sunday. However, all of his other shows at the Amway this week are still a go, pending further developments in the forecast.

"We're sorry to announce the 2016 Beach Town Music Festival, set to be held this weekend at Indian River County Fairgrounds, has been postponed due to Florida Governor Rick Scott declaring a State of Emergency for all of Florida's 67 counties," festival organizers said on the event's Facebook page.

A Peter Frampton show, slated for Oct 7th at the Sunrise Theater in Fort Pierce has been pushed back to October 9th.

Winter Garden Music Fest in Winter Garden, Florida has canceled their first day of performances, but at present, the Saturday and Sunday lineups are still full steam ahead.

"Unfortunately due to the storm, we have to announce that all #WGMusicFest events for Friday, October 7th have been canceled. However, our full Saturday & Sunday lineup is still scheduled as is! We can't wait to see you!" event organizers said via social media.

The Mustang Music Festival which was set for Oct. 7 & 8 in Corolla, NC has been canceled. The festival featured a lineup that included Yonder Mountain String Band and G Love And Special Sauce.

Organizers for the event announced the cancellation via Facebook: "It is with immense sadness we have to cancel the 6th Annual Mustang Music Festival. After sleepless nights, consultations from local and regional officials, we have determined that proceeding further in our production is hazardous and unsafe for our patrons, crew, and performers. While the forecast for Hurricane Matthew has improved over the past few hours, there is still much uncertainty to its effects. North Carolina is under a State of Emergency and evacuations of the North Carolina coast are still possible. All tickets purchased with a credit card will be refunded over the next 10-12 business days. Tickets purchased locally with cash will be refunded at the point of purchase beginning Tuesday, October 11. A major thank you to everyone that worked on trying to make my dream a reality. I'm hopeful to be able to recover from this setback and try again in the future."

The Adventure in the Park festival in Lakewood, NJ has been canceled.

"Due to public safety concerns, the township of Lakewood New Jersey has officially canceled Adventure In The Park 2016 as a result of the uncertainty of Hurricane Matthew's impact on the Jersey Shore this Friday, October 7th through Sunday, October 9th," organizers wrote in a post on the event's website.

The Social in Orlando canceled shows by The Main Squeeze on Oct. 6th and Junior Boys on Oct. 7th. A sold out Oct. 8th show by Taking Back Sunday is still a go at the time of publication.

The House of Blues at Disney Springs has postponed a show by Slippery When Wet that was originally scheduled for Friday until Oct. 14th. The Made To Destroy tour show on the following night is still on the books.

The Now Ensemble's and Ensemble AMF's performances at the classical music-focused Accidental Music Festival have been postponed.

"Matthew breaking my heart all over again. Unfortunately, we are canceling/rescheduling Thursday's performance by NOW Ensemble and Saturday's performance by Ensemble AMF. Rescheduled dates will be announced soon. Stay safe, everyone," a rep for the event said via social media.

DJ/Producer 3LAU Haus's Thursday's concert at Venue 578 in downtown Orlando has been pushed back until Feb. 9.

If you're aware of other cancellations or want help getting the word out about a postponed show, drop us a line at news@celebrityaccess.com