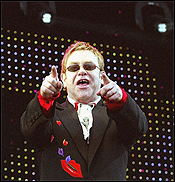 NEW YORK (CelebrityAccess MediaWire) — In the wake of the cancellation of the European leg of Elton John's forthcoming "Red Piano" tour, there has been claims and counterclaims made by both the European promoter of the tour and Elton's management.

As previously reported in CelebrityAccess, initial claims were that the show was canceled by the promoter because of a lack of guarantees for the show.

That's not true, at least according to Andreas Vorsteher, president of Imagination Marketing who was reportedly the promoter for the show. When asked for comment on the canceled tour, Vorsteher told CelebrityAccess

"The 'Elton John: The Red Piano Tour 2007' with shows scheduled to take place in – Seville (September 14th), Venice (June 5th & 6th), Berlin (June 22nd), Moscow (July 3rd) and Versailles (September 9th) – had to be canceled due to major differences between the promoter and the Elton John Management, which jeopardized a timely, safe & successful implementation of the Red Piano Tour – Europe '07. We had to terminate the contracts with the artist, because the artist and his management company did not fulfill their obligations under the contracts."

Vorsteher further asserted to CelebrityAccess that claims that he was "unreachable" by Elton's management were not correct and that in addition to his office contact information and email, they also had his private cell phone number. For the record, Mr. Vorsteher responded promptly to our request for comments. As of press time, Elton's management – Keith Bradley at Twenty-First Artists Ltd. has not responded to our queries. – CelebrityAccess Staff Writer