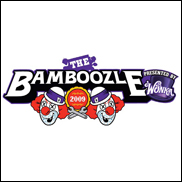 GLENDALE, CA (CelebrityAccess MediaWire) — WONKA and Live Nation announced Tuesday the 24th that the candy maker has been named the presenting sponsor of The Bamboozle, a festival and tour born five years ago that connects artists and their fans.

The Bamboozle presented by WONKA is the only place to experience more than 200 of the most talked about bands in pop, punk, mainstream, emo and more, performing live on multiple stages. The Bamboozle will be held at the Meadowlands Sports Complex in East Rutherford, N.J., on May 2 and May 3 with headliners Fall Out Boy and No Doubt, who will be performing their first show in five years. The Bamboozle Left is set for The Festival Grounds at Verizon Wireless Amphitheater in Irvine, Calif., on April 4 and April 5 with headliners Fall Out Boy, 50 Cent and Deftones. A 22-market Bamboozle Roadshow will take The Bamboozle’s party experience across the country, with club dates scheduled nationally beginning on April 5 in Tucson, Ariz., culminating on April 30 in Farmingdale, N.Y., featuring We The Kings, Forever The Sickest Kids, The Cab, Never Shout Never and Mercy Mercedes.

“The Bamboozle is a unique platform that gives WONKA access to a very desirable demographic of young music fans,” said Russell Wallach, President of North American Alliances for Live Nation. “This festival and tour are perfect examples of the variety of brand building opportunities that our integrated platform makes available to corporations.”

“We have a phenomenal lineup for all of our Bamboozle events this year,” said Live Nation executive John D’Esposito, the event’s founder. “Last year’s festival in New Jersey sold more than 70,000 tickets. Currently, ticket sales for this year’s festival are tracking 9% ahead of last year. We are already off to an amazing start for what we expect to be a very successful run for Bamboozle.”

“The Bamboozle culture is magical, bringing the energy of the world’s most exciting bands together with an incredibly vibrant group of music fans,” said WONKA Marketing Manager, Vilma Livas. “It’s a perfect fit with WONKA where we distinguish our brand by creating whimsical, imaginative products for candy lovers of all ages. Together with Live Nation, we are working to develop exciting, unexpected experiences at all The Bamboozle events this summer that music fans are sure be blown away by.”

Worldwide Début of the Latest Acts of Imagination from WONKA

The bands won’t be the only stars of these shows. Willy Wonka has been toiling away in his factory, and he has two new surprises to unveil for the first time at The Bamboozle Left and The Bamboozle.

WONKA is revealing exclusively to Bamboozlers its one-of-a-kind imagination station: WONKAvision. Using the interactive technology of WONKAvision, anyone can be an innovator – just look in the mirror! Play a never-seen-before WONKA game; go on a photo scavenger hunt; or design a customized masterpiece! When you’re finished, your work of art will be magically transferred to WONKA.com to delight millions of visitors online.
Fans have to get inside the Bamboozle gates to get the first taste of the WONKA brand’s second surprise and newest treat, WONKA KAZOOZLES. A “delickoricious” chewy candy to feed the imagination, KAZOOZLES combines TWO long and luscious licorice ropes with fruit punch-flavored candy filling. Bamboozlers will be among the first in the world to try the two new varieties – Cherry Punch and Pink Lemonade. Everyone else will have to wait until the national launch in June.

Extra lucky Bamboozlers will become WONKA VIPs. Awesome rewards such as special seating and second-day tickets await them. A few WONKA fans will receive an elite WONKA Gold Card entitling them (and their friends) to become a WONKA insider with a special benefit: a six-month candy supply!

The talent line-up and soundtrack for the Bamboozle Roadshow will include five electrifying bands: We The Kings, Forever The Sickest Kids, The Cab, Never Shout Never and Mercy Mercedes. A special correspondent will be reporting from the road throughout the tour. There will be exclusive WONKA behind-the-scenes interviews with the bands, and videos from every stop along the way. –by CelebrityAccess Staff Writers