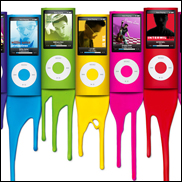 TREND (Hypebot) – 1. Falling Behind – Ten years ago, The Record Industry had The CD Release Complex and knew exactly what to do. Now everyone else is taking fans to the future that they used to determine. Instead of leading the way, they're left holding the hands of innovators and squeezing tightly when they get scared. Have they been so focused on yesterday's problems that they aren't actually finding tomorrows solutions?

2.Groundswell – Defined as, “A social trend in which people use technologies to get things they need from each other, rather than from traditional institutions like corporations.” Has thinking against the grain been a logical way of fighting file-sharing?

The RIAA suing The Music Industry's customers wasn't a strategy, shutting down their Internet isn't either. The Wisdom of Crowds will retain its superiority over industry. There are people who wake up in the morning because the challenge of finding new ways around these roadblocks excites them.

Artists don't understand that giving their music away, getting a ton of MySpace friends, and flipping the funnel six months later will never work. Free by itself isn't a strategy and those who did thrived by doing got lucky. You need to make money along the way and have a business model.

3. Pirate Software – It remains to be most efficient system for getting music. You can download AC/DC's Complete Discography, a 3GB torrent containing 276 songs at 320bps, in a few hours on a good day. Even that isn't the problem, its that you can put over ten into the program, fall asleep, and the next day everything will be done. There are many people who haven't crossed over to torrents due to their steeper learning curve. What happens when next generation file-sharing becomes as easy as its predecessors and harder to stop?

4. Paradox of Choice – Does a large array of options discourage music fans because it forces an increase in the effort that goes into making a decision? Even if this paralysis overcome, its easy to imagine that you could've made a different choice that would've been better. Back in 1995, if you bought a bad CD you could blame The Record Industry. Today, there are systems in place to prevent this and you're left with only yourself to blame. I own three hundred plastic discs that aren't relevant to me anymore and to me this is an example of how I'll never know what kind of music I'll like, even a year from now.

5. Music Overload – It’s both exciting and disheartening to wonder, but is there too much music? The CD Release Complex was a way of regulating the flow of content between artists and people. For those who buy music The Paradox of Choice is a reality, but what does it mean for pirates? File-sharing allows them to fail at trying everything while committing to nothing. They download more music than they could ever possibly listen to. Have you ever listened to music for 45 days and never heard the same song? Pirates have.

6. Searching Alone – Searching for music online doesn't have the same feeling as combing through selections at a local record store. Walking through the aisles at Best Buy, Walmart, and Target is an experience that's feels lifeless at best. If you need help, the likelihood of an employee giving you real insight is questionable. Big box retail and online music are more efficient, but with them do we lose the sense of community local stores gave us?

7. Not Local – It’s estimated that this generation will have 10 to 14 jobs before their 38th birthday. Before they turn 44, it’s estimated that they will have moved 9 times. This concerns me because that means that the local artists and record stores aren't so local anymore. There are plenty of people who've been uprooted by this economy with possibly less money. How long does the average person have to live somewhere before they settle down and support local causes?

8. Mental Walls – With all the talk going around about engaging your audience, telling a story, and leading a tribe, do we forget that the mental walls around artists still exist? Most people don't realize how transparent the walls are becoming. We've been conditioned for years to believe that rock stars are untouchable. Turning around and saying that you can now interact with a select few gets confusing.

9. Attention – There's too many artists for people to actually pay attention to. How many artists can the average person could realistically follow? How many newsletters does a fan want to receive before its considered too much clutter? The concert industry makes it easier to participate just by showing up, but do you run the risk of being overbearing by hoping for more?

10. Specialization – As we narrow the gap between search and discovery with music online, we're in turn empowering new mavens to declare their social status. Music fans have an endless array of choices to explore and filters to help them with sorting. However, specialization in itself becomes a problem. We are becoming increasingly individualized with habits entirely unique to us and our taste. Does specialization make it harder to find people, with similar tastes, willing to participate in your interests?