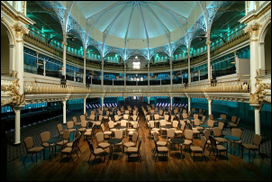 
The deal was completed following the successful grant of a new lease with Amewood Estates Limited.
From September, it will be renamed O2 Academy Bournemouth; under the ownership of AMG it is set to host around 150 events per year.


"The venue is beautiful," said AMG CEO, John Northcote, in a statement. "It's in great condition and we're looking forward to making some minor operational improvements but primarily bringing the same vibrant diary of live acts and club events that people expect from AMG venues, filling a significant gap in the market."


The building has been in operation for over 100 years and has a capacity of 1,925. Through the years, it has been used as a circus, theater, dance hall, ballroom and nightclub. In 2007, it underwent a multi-million pound refurbishment.


AMG began a long-term partnership with U.K. telco O2 at the beginning of 2009, which included O2 naming rights for AMG venues and access to priority tickets for O2 customers.

AMG's stakeholders include Live Nation, SJM Concerts and Metropolis Music. It claims to attract 3.5 million customers to its venues each year.