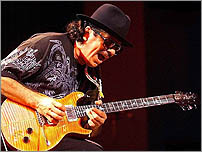 NEW YORK (CelebrityAccess MediaWire) — Manas Sergio Vallin, Conjunto Primaveras Tony Melendez and the LA-based band Ozomatli are scheduled to perform in honor of Carlos Santana when the songwriter/artist is honored as an Icon by performing rights organization BMI. The presentation and performance will take place during the 12th annual BMI Latin Awards April 21 at the Four Seasons Hotel, Las Vegas.

Santana will be the first songwriter designated a BMI Icon at the company's Latin Awards. The honor is given to a creator who has been a unique and indelible influence on generations of music makers. He joins previous Icons such as James Brown, Dolly Parton, Isaac Hayes, Brian Wilson and Van Morrison.

The BMI Latin Awards recognize the songwriters and publishers of the most performed Latin songs on U.S. radio and television of the company's repertoire of approximately 4.5 million musical works from around the world.

In addition to a Latin Song of the Year, Songwriter of the Year and Publisher of the Year, the 2nd annual peermusic Latin Scholarship will also be presented. Funded by the music publishing company and a partnership with the BMI Foundation, the peermusic scholarship is open to music students around the country and is a $5,000 award for continuing education. The winner will be announced that evening. – CelebrityAccess Staff Writers