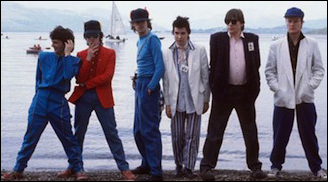 DUBLIN (VIP-NEWS) — The Boomtown Rats are to reunite for the Isle of Wight Festival – 26 years after the band last performed together.

Fronted by Bob Geldof, the band have been added to the Sunday line-up of this year's event at Seaclose Park in Newport.

They are to play the main stage in a UK festival exclusive.

Mr Geldof said: "I've always fancied playing the Isle of Wight Festival ever since I hitched there in the good/bad days when I was a kid."

The Boomtown Rats will join a line-up also featuring The Killers and Bon Jovi, who have already been announced as headliners for the first major festival of the summer, in June.

John Giddings, the festival's promoter, said: "It's great that they have chosen the Isle of Wight Festival as their reunion. Our audience will love them, their catalogue is classic."

After forming in 1975 The Boomtown Rats played early UK shows with The Ramones and Talking Heads.

They were one of the biggest bands of the late 70s and 80s with a string of top 10 hits and platinum albums, Brit Awards, Ivor Novellos and Grammy Awards.

The band made history as the first Irish band to have a UK no 1 hit with Rat Trap and scored a top single in 32 Countries with I Don't Like Mondays.

They notched up six chart-topping albums before splitting up in 1986.

The group are joined on the festival's line-up by their contemporaries Blondie, along with more up-and-coming acts like Jake Bugg and Emeli Sande.

The festival runs from 13-16 June, at Seaclose Park in Newport.

Last year's event was marred by heavy rain, which turned many car parks into mud baths with some festival-goers forced to sleep in their cars as traffic became gridlocked.