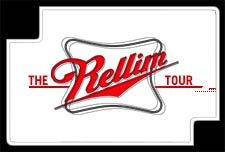 Clear Channel Worldwide and Miller Brewing Company have entered into a national marketing alliance
with the launch of "The Rellim Tour – A View From The Inside, sponsored by Miller, which is commiting
$25 million to the national tour. (Rellim is Miller spelled backwards). The tour marks the first time that Clear
Channel is using both its entertainment and radio divisions to develop a marketing
program for a sponsor on a national level.

The three-leg, 19-city tour gives fans a chance to see life "backstage." Each portion of the tour
will feature a different emerging band and
mix music styles ranging from alternative to pop/rock and metal.

Tickets for the tour will only be available through local radio stations via promotional contests A smaller
group of winners will be able to spend the day with the bands hanging out on their tour bus, in the green
room and attend sound checks.
The tour kicked off March 10 in Philadelphia.

"Concertgoers never have the chance to go where the real action is — backstage. The Rellim Tour
unlocks the secrets to life
on the road and gives fans a taste of the rock 'n' roll lifestyle they've always wanted,'' said Paula Balzer,
chief marketing officer
of Clear Channel Entertainment. "The Miller program is an excellent example of how assets across Clear
Channel can come together to create terrific broad-based marketing programs for our partners."

Adds Steve Lauletta, senior manager/sports & event marketing at
Miller, "We feel that this tour will help us to reach our objectives by utilizing
music as a platform to build an emotional connection between Miller and
consumers. We were interested in sponsoring this innovative and
consumer-relevant music program because of what Clear Channel Worldwide
could deliver across their entertainment and radio properties."
Video footage and photos from these grand prizewinner experiences can be viewed on
www.RellimTour.com.