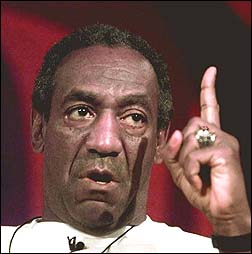 Comedian Bill Cosby rejected Cincinnati Mayor Charlie Luken's request to help
pay $600,000 in fees to the plaintiffs' lawyers – Black United Front and the
American Civil Liberties Union of Ohio – in a racial profiling lawsuit against the city,
which has been settled. Cosby, along with fellow comedian Whoopie Goldberg,
who was also asked to contribute, have honored a boycott of the city called for by
the Black United Front and other groups demanding fair treatment of
African-Americans by police.

The following are excerpts from a letter written by Bill Cosby's lawyer, John P.
Schmitt, to Mayor Charlie Luken, as printed in the Cincinnati Enquirer:

"Mr. Cosby is particularly distressed that your request was made public in what can
only be described as an inappropriate and heavy-handed attempt to pressure him into
providing the requested funds."

"… Mr. Cosby did not organize any boycott of your city and had no involvement in
any litigation relating to radical issues in your city. His sole action was to make the
personal judgment that the racial climate in Cincinnati at the time he was
scheduled to perform in your city was such that he was uncomfortable performing as scheduled."

"I only asked Mr. Cosby, who has caused hardship for hundreds of hard-working
Cincinnatians and their families, to take a closer look, and help us as we move our
city forward. I honestly thought he would be receptive, knowing his long history of
success in our region. To this date, he has not returned a phone call, only dealt with the city through agents and lawyers."