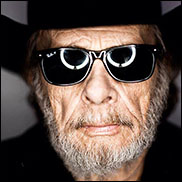 LOS ANGELES (CelebrityAccess) — Country music legend Merle Haggard, one of the principle architects of the Bakersfield Sound, and a man whose life seemed to be drawn from the music he performed, died on Wednesday in California. He was 79.

Haggard had been suffering from pneumonia for several months and just last week announced the cancellation of a series of live appearances.

Born in Oildale, California in 1937, Haggard was the youngest of three children and while spending time in and out of reform school, started to learn guitar at an early age. He ran away at the age of 14 and worked at a variety of jobs, including performing but found himself frequently at odds with the law. After returning home, Haggard continued to perform locally and eventually landed a gig on a local television show "Chuck Wagon" in 1956.

However, his budding musical career was derailed after Haggard and a friend were arrested on robbery charges and he eventually found himself in prison after an escape attempt.

While in California's San Quentin, Haggard performed in the prison band and was present when Johnny Cash performed there in 1959.

After Haggard's release from prison, he worked odd jobs and became active in the Bakersfield scene, performing alongside other up-and-coming artists like Buck Owens and Wynn Stewart.

In 1962, Haggard released his debut single, “Skid Row” and found chart success with his follow-up “Sing Me a Sad Song,” which broke the top 20.

Haggard continued to produce hits throughout the rest of the 1960s and 1970s, including “Okie From Muskogee" which saw his first real crossover success. Other hits included “Today I Started Loving You Again” which is perhaps the most covered of his songs and "Irma Jackson" a song about an interracial romance.

Haggard continued to tour and record throughout his career, with his final album “Working in Tennessee,” released in 2011.

Mr. Haggard is survived by his wife, Theresa, and his children: Dana, Marty, Kelli, Noel, Ben and Jenessa. – Staff Writers